December 24, 2015
KIEV, Ukraine -- Conflict at the highest levels of the Ukrainian government has become so sharp in recent weeks that the battles have turned public and the fights have gone viral, as the jostling for power undermines efforts to deal with war, corruption and a nose-diving economy. 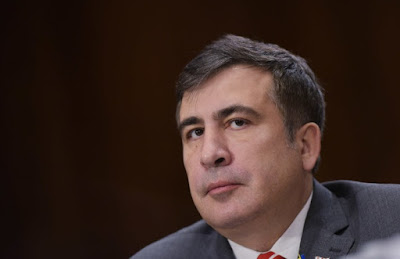 The former president of Georgia, Mikheil Saakashvili, is today's governor of Odessa.

The tensions tearing apart Ukraine’s ruling classes was full display at a meeting of Ukraine’s reform council, which turned into a shouted exchange among top officials.

“You are an asshole and clear out of my country,” responded Avakov, throwing a full glass of water in his direction.

Reduced to the role of spectator, Petro Poroshenko, Ukraine’s president and the man who appointed Saakashvili, the former president of Georgia, as governor of Odessa, had reason to hold his head in his hands.

The spat showed Poroshenko was unable to command authority among his colleagues, who are engaged in an often literal fight to the political death.

They’re warring over the whether Prime Minister Arseniy Yatstenyuk, whose popularity has dropped to the low single digits, should stay, and what role, if any, Saakashvili should play at the top of Ukrainian politics.

“It seems like there are on-going battles behind the scene for key leadership roles/positions,” wrote Timothy Ash, an emerging markets analyst with Nomura, the investment bank.

Two days after the water-throwing incident, the president, prime minister and parliamentary speaker issued a joint statement urging unity, and insisting Yatsenyuk’s resignation was not up for discussion.

But despite the unusual statement, pressure continues to grow on Yatsenyuk.

A vote of non-confidence in the prime minister is likely in the New Year.

Oleg Barna, an MP who tried to lift Yatsenyuk off his feet and bodily carry him out of parliament a couple of weeks ago — providing another viral sensation — is said to have gathered 90 of the necessary 150 signatures required to call such a vote, according to parliamentary sources.

Focused on political battles, the legislature is stalled on a key vote on decentralization, a crucial part of the Minsk peace agreement meant to end fighting with Russian-backed rebels in the east of the country.

And added to those problems, parliament is having trouble agreeing on a budget acceptable to the International Monetary Fund, jeopardizing Ukraine’s crucial financial lifeline.

“It is clear that 24 years of warped development, with oligarchic capture of the political, judicial and governmental process in Ukraine, has left corruption endemic and ingrained,” wrote Ash.

According to Taras Berezovets, a Kiev-based political analyst, parliament is headed for paralysis.

Early parliamentary elections in 2016 now look likely, he said, the question is when: spring or autumn.

Based on current polling, elections would result in a far less pro-European coalition, with eastern-leaning opposition parties such Opposition Bloc and Renaissance doing well.

A poll conducted by the Rating organization in October suggested they would get nearly a fifth of the vote.

The likeliest to benefit from early elections is Saakashvili, Ukraine’s most popular politician.

Publicly, the Georgian has said he isn’t interested in becoming prime minister.

Privately, however, his backers say that’s what he’s aiming for — “Or, at the least, vice premiership in a government without Yatsenyuk,” said one ally who asked to remain anonymous.

Such an appointment would be opposed by many Ukrainian politicians, weary of Saakashvili’s ability to disrupt the status quo.

It would also worsen the already terrible relationship between Moscow and Kiev.

Speaking at his annual press conference last week, Russian President Vladimir Putin said Saakashvili’s appointment as governor of Odessa was to “spit in the face of every Ukrainian.”

On December 13, Saakashvili launched a new anti-corruption initiative in Odessa, the port region he has governed since May.

He renewed his attacks on Yatsenyuk’s government, accusing it of “covering up for $5 billion of corruption in government companies” every year.

The intensity of criticism leveled at Yatsenyuk by Saakashvili’s team have led some to speculate that Poroshenko is using the Georgian as an attack dog.

Mustafa Nayem, a reformist MP also associated with the Saakashvili ticket, addressed the speculation in a Facebook post.

He said “hell” would continue until Poroshenko offered a “strong position” either way:

“A governor can’t accuse the prime minister of corruption and stay in his post. If the governor stays in his post, that means they’re either scared of him or they are using him.”

If anything, however, the tempestuous Georgian’s ties with Poroshenko also appear to be fraying.

When asked if the Saakashvili team had agreed its anti-corruption conference with the president, Zurab Adeishvili, the softly spoken former Georgian justice minister now serving as Saakashvili’s chief of staff, did not confirm, but said, “We are a force that supports the president, but everyone needs to speed up reforms and we believe the president understands this.”

Saakashvili’s deputy Sasha Borovik, however, acknowledged relations with the president are “not always easy.”

The Georgian is a problem for Poroshenko.

On one side the independent and popular Saakashvili upstages him, but on the other the president continues to need to be associated with Saakashvili’s popularity.

In the same way, Saakashvili continues to need Poroshenko’s power.

“The two men are still useful to each other, but that might change,” said Sergii Leschenko, a reformist MP and Saakashvili ally.