Food Aid Provides Lifeline For Most Vulnerable In Ukraine Conflict

December 19, 2015
SVITLODARSK, Ukraine -- The conflict in Ukraine has left millions displaced and in need of help. Aid groups are busy trying to distribute food to those - on both sides - who have no other means. 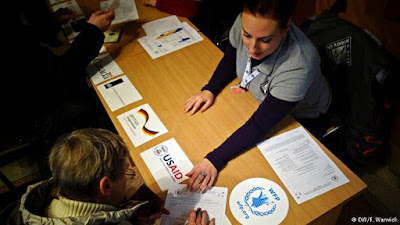 The registration process is cross-checked by the WFP's NGO partners

In the heart of the buffer zone and a few kilometers from the pro-Russian separatists' border lies the Ukrainian town of Svitlodarsk.

Coal shafts and slag heaps, the remains of the country's once vibrant mining industry, pepper the landscape where much of the fighting between government forces and separatists has taken place over the past 18 months.

Many of the mines have sustained damage, leaving thousands of coal miners out of work.

Pensioners in thick overcoats, headscarves and berets queue outside the town's Soviet-era Palace of Culture, now partly used as a registration center for humanitarian aid.

Vera Mihailova Kopeinika, 50, is among those waiting their turn.

Her husband and son are miners - and unemployed.

"How can my family survive on 37 euros? Where can they find work if all the mines have been damaged by the shelling. Nobody needs us."

Five million people require humanitarian assistance in Ukraine, whether in government- or separatist controlled areas, with 1.3 million in need of food aid, according to the European Commission's Humanitarian Aid office.

The UN's World Food Program (WFP) and NGO partners have been coming to the aid of internally displaced persons (IDPs) as well as residents.

"In non-government controlled areas we distribute food, so it comes in the form of a food parcel," explained WFP communication officer Deborah Nguyen.

"And in the government-controlled areas we distribute through vouchers, usually shops where the financial system is working."

The situation is especially desperate in the separatist-controlled Donbas region.

Last winter Kiev cut off all access to financial institutions in areas that weren't under government control.

That meant pensioners couldn't draw their pensions, and neither banks nor ATMs could distribute hryvnia, the Ukrainian currency.

There the Russian rouble has become the de facto official currency, and prices are two to three times higher than in Ukraine.

Not all parcels are equal

Alongside the WFP and NGOs, Ukrainian billionaire Rinat Akhmetov also distributes food through his own humanitarian organization, the Akhmetov Foundation for Development of Ukraine.

But not all food parcels are the same.

"We compared our food parcels with Akhmetov food parcels," said Larisa Kobzarenko of ADRA Ukraine, a local WFP partner, "and their food parcel costs something like five euros ($5.43). It's very cheap, it's just cereals, there's no buckwheat, no rice, no beans, no meat. Our parcel costs around 38 euros ($41.30)."

Still, many are fortunate to receive any aid at all.

Over 2.3 million people have been displaced by the conflict, and the distribution of parcels and vouchers has become a lifeline for the most vulnerable.

Left to their own devices

But getting the aid to them has been a challenge.

In July separatists stopped humanitarian convoys and prevented them from reaching their destinations.

The humanitarian agencies were expelled from separatist-controlled areas and required to apply for new accreditation, Nguyen said.

Such problems are frequent stumbling blocks for the WFP.

"The issue is that the United Nations cannot recognize these authorities as a government, and we don't accept this as an accreditation, because for us they are not a government."

With winter slowly closing in on the region, the separatists' authorities gave WFP's partners People in Need, ADRA and Mercy Corps the green light to distribute aid, after a long and cumbersome registration process.

But not everyone is eligible.

Locals who continue to live in damaged or destroyed housing do not qualify for humanitarian assistance, which is reserved for internally displaced persons, according to Ukrainian law.

Those who have nowhere to go and no money to pay for alternative accommodation find themselves stuck - unable to move and unable to claim aid.

ADRA's Kobzarenko recently came across a family of five in government-controlled territory whose home had been destroyed.

They were living in a cow shed for lack of any other option.

"Since they are not IDPs, they were not provided this assistance."

But their situation was desolate, so ADRA turned to the WFP to make an exception.