December 09, 2015
BRUSSELS, Belgium -- The European Union’s executive is set to give its backing to Ukraine’s bid for visa-free access to the bloc, EU officials said, a step likely to stir disquiet among some member states already struggling with this year’s migration crisis. 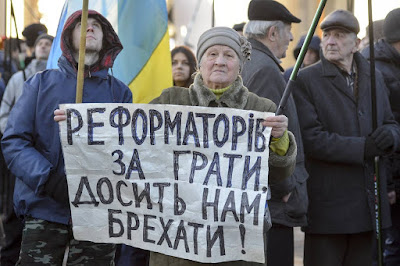 An antigovernment rally in Kiev on Tuesday. The sign reads “Put the reformers behind bars. Enough lying to us.”

Ukrainian President Petro Poroshenko has made visa-free access to the EU a key goal of his administration.

It would symbolize the westward shift since the ousting of former President Viktor Yanukovych, and be a welcome sign of support from Europe as the country struggles with pro-Moscow separatists in its east and a sinking economy.

On a related front, the International Monetary Fund tweaked its lending rules on Tuesday, paving the way for more emergency cash to Kiev and undermining Russia’s economic leverage over the former Soviet republic.

The European Commission is likely to finish clearing Ukraine’s bid by the end of January, the officials said.

However, there are major doubts over whether EU governments will provide the unanimous backing necessary to complete the move.

The EU has also promised to accelerate work on Turkey’s visa-free bid as part of a bargain designed to win Ankara’s help in stemming the flow of Syrian refugees and other migrants into Europe—close to 1 million so far this year.

But even with safeguards that allow EU member countries to freeze arrivals in an emergency, the prospect of easing access for over 100 million citizens from Ukraine, Turkey and elsewhere is bound to meet resistance, officials say.

EU officials say any Russian moves that worsen the crisis in eastern Ukraine would likely improve prospects for visa-free access, but more problems with the influx of asylum seekers would set the process back.

In the aftermath of the terror attacks in Paris, which further intensified concerns about border security, EU leaders including German Chancellor Angela Merkel are warning that Europe’s internal, document-free travel zone could collapse.

The commission has promised its review of Ukraine’s progress in completing conditions for visa-free access by the end of the year, when it will also publish reviews for Kosovo and Georgia.

EU officials say Ukraine has fulfilled most of the conditions but there is still some politically sensitive work to undertake.

For example, the prosecutor for a new, specialized anticorruption office must be allowed to start work, and Kiev must complete the creation of a well-resourced agency to help recoup misappropriated state funds.

Until this week, the commission intended to tell Ukraine it was on track to win the right of visa-free travel, but must complete all the specified steps first.

Legal work for the approval in Brussels would begin only when those commitments were met.

In a shift, the commission is now seeking—ahead of the publication of its report—only assurances from Mr. Poroshenko that Ukraine will complete the reforms in the coming weeks.

Those assurances could come in the form of a letter and would be enough to allow preparations to be completed by the end of January.

Mr. Poroshenko is due in Brussels on Dec. 16 for meetings with Commission President Jean-Claude Juncker and others.

The change of plan is something of a political risk by Mr. Juncker’s team.

The government in Kiev has faced a growing battle pushing anticorruption legislation through an increasingly fractious parliament in recent weeks.

Even if the measures are completed, EU officials acknowledge bringing member state capitals on board will be challenging.

That could be all the harder, one EU official said, if there is any sense that Ukraine was allowed to cut corners.

In a news conference with Mr. Poroshenko in late August, Mr. Juncker said he didn’t “doubt for one single second” that capitals would sign off if Brussels recommended visa-free status.

Other EU officials aren’t so confident.

In recent months, the EU has seen the biggest influx of migrants enter the bloc since the aftermath of World War II, sparking backlashes in some countries and setting EU capitals at loggerheads over how to share the burden.