November 24, 2015
DONETSK, Ukraine -- If the leader of the self-styled Donetsk People’s Republic (DNR) has anything to say about it, the current cease-fire in eastern Ukraine will never translate into permanent peace. 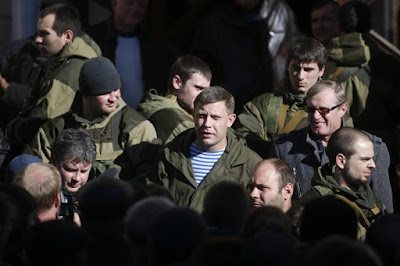 Alexander Zakharchenko at the Kholodnaya Balka mine in Makiivka, outside Donetsk, October 29, 2014.

Nor will it lead to the separatist territories’ reintegration into Ukraine.

Alexander Zakharchenko’s statements before and after the guns went silent on the first of September reveal a continued rejection of Ukraine, a commitment to Donbass independence, a strong determination to acquire more territory, and a radical division of people into friends and enemies.

Small wonder that separatist violations of the cease-fire have increased significantly since early November.

It is impossible to say whether Zakharchenko’s militancy is the posturing of a desperate man or the vision of a ruthless leader.

Either way, it suggests that the DNR’s interests are incompatible with Ukraine’s and that the Minsk-2 accords will fail to achieve their intended goal of reintegrating the DNR and its sister entity, the Luhansk People’s Republic (LNR).

Even if Russia pressures the DNR to make substantive concessions—and that is an extremely big if—its leader will resist.

Putin claims to be a bystander in the war, whereas Zakharchenko insists that he is in charge.

The reality is more complex.

As the September 1 cease-fire showed, Putin’s is the decisive voice.

He started the war, and he can sue for peace.

But Zakharchenko isn’t just a puppet.

He has ideas, ambitions, and plans of his own, and his acquiescence will ultimately determine whether any deal holds.

As head of the Donetsk-based pro-Russian and pro-Soviet organization, Oplot (Bulwark), he actively opposed the Euromaidan Revolution of 2013­–14, was one of seven armed men who seized the Donetsk city administration building on April 16, 2014, and was an active combatant in subsequent fighting with Ukrainian armed forces.

Zakharchenko has dominated the area’s political landscape since then.

The DNR is not, he has routinely insisted, Ukrainian territory.

It is an independent state.

“Children,” he says, “must understand that they live in a different country.”

Whereas Ukraine is in the grip of a fascist junta and “outspoken Nazis,” the DNR is democratic and committed to the commonwealth.

That there is dissent and disagreement within the DNR is “normal,” says Zakharchenko.

“After all, we are not Ukraine!”

Zakharchenko insists that Kiev exists in a “parallel, virtual reality.”

Indeed, he believes “Ukraine itself has become a virtual reality under their leadership,” suggesting that both the state and the nation are fictitious.

One may dispute Zakharchenko’s characterization of Kiev’s reality as virtual, but he is right to call it parallel.

There appears to be no room for compromise.

In turn, any attempts by Ukraine to retake the Donbass are, in effect, invasions.

On September 7, just a few days after the cease-fire went into effect, Zakharchenko compared the Kiev government and army to the invading Nazis:

On another occasion, he accused Kiev of committing “genocide against our people.”

Naturally, all of Ukraine’s aggressions against the DNR have the backing of nefarious Western forces, including Doctors Without Borders.

But woe to Ukraine if it decides to join NATO (a prospect Zakharchenko appears to believe is possible in the immediate future).

As he said on September 25, “If Ukraine starts preparing a referendum on NATO membership or other procedures, the DNR will immediately abandon the Minsk agreement and proceed with cleansing all the territory of the Donbass of the Kiev occupation.”

Zakharchenko intends to win back the rest of the Donbass even if Ukraine makes no move to join NATO.

“I have stated many times that I consider the territory of the Donetsk People’s Republic to be the entire territory of the former Donetsk province. And I do not renounce those words,” Zakharchenko said on November 5.

He sees two possible scenarios of the DNR’s expansion.

If Kiev resumes fighting, Zakharchenko will seize the Donbass by force.

If the Minsk peace process continues, the territory will be retaken through political negotiations.

Zakharchenko was even more outspoken in an August 27 interview.

The DNR’s minimum goal is recapturing all of Donetsk province.

His maximum goal is “a Great Novorossiya,” or New Russia, which would encompass all of southeastern Ukraine.

How to attain that goal will be decided “when we’re victorious.”

In the meantime, “there’s no need to sit and wait” with respect to “the rest of so-called Ukraine.”

Whoever “wants to be rid of an illegal government, destroy the fascists, and stop Ukraine from being a spineless puppet in the hands of American puppeteers should evince a more active position.”

Zakharchenko’s radicalism manifests itself in his attitude toward refugees from and residents of the DNR.

Those who fled to Ukraine and opposed the DNR will not, “to put it mildly,” be welcomed.

To be sure, “we won’t shoot returnees,” but they will have to prove their “usefulness” and make amends.

Open enemies will “possibly be tried.”

As to those who stayed in Donetsk, Zakharchenko admits that “many” remained, not out of ideological conviction but because “they simply couldn’t flee.”

That makes them no different from the refugees.

Zakharchenko also minces no words about who will rule his state: “those who defended the Republic with weapons in their hands or who, under fire, helped rebuild our industry, economy, and infrastructure.”

Kiev’s recommendations for conducting local elections in the Donbas are thus divorced from reality, as Zakharchenko puts it, since they entail the participation of “those parties that created the political cover for the punitive operation in the Donbass.”

Since all of Ukraine’s democratic parties supported military action against the DNR, the local elections mandated by Minsk-2 would in effect feature only one set of candidates—Zakharchenko’s elite.

Some of this bravado must cheer Russia.

In Zakharchenko, Putin has a fanatical opponent of Ukrainian statehood, a man who will, under no circumstances, compromise with Kiev and the West.

But Zakharchenko’s fanaticism must also be a source of concern.

On November 5, the DNR leader insisted that the “fate of the Donbass” is decided in the Donbass, and not in Moscow, Washington, Berlin, or Paris.

Zakharchenko’s next sentence had to worry the Kremlin:

“I personally do not intend to be a puppet in anyone’s hands.”

Zakharchenko is best viewed as a regional Russian warlord who, like Chechnya’s Ramzan Kadyrov, will be reluctant to play the role of Putin’s toady.

The recent increase in DNR violations of the cease-fire demonstrates the inherent tensions between Putin and Zakharchenko.

Attacking the Ukrainian armed forces is an excellent way of raising the morale of the DNR’s dispirited fighters, many of whom appear to feel abandoned by Russia.

But the escalation and possible collapse of Minsk-2 would not be advantageous to a Russia worried about Western sanctions and poised to increase its involvement in Syria.

Unless Zakharchenko’s words are insincere, there is no way he could possibly agree to implement any version of the Minsk-2 accords.

Whatever its own intentions, Russia may be able to twist his arm up to a point, as it did by imposing a cease-fire on his forces on September 1, but it is highly unlikely to force him to follow Moscow’s orders blindly.

Minsk-2 thus has two possible outcomes. Most probable is a “frozen conflict” along the lines of Transnistria, the breakaway region of Moldova.

Ukraine would be spared the pain of having to integrate a region that cannot be integrated, while Zakharchenko and his elite would be able to continue building their statelet.

The West would be happy with any outcome that stops the guns from firing.

It would still have to spend billions on the DNR economy, but it would be able to claim that it saved the Donbass from the “fascists.”

Less likely is a very loose confederation of Ukraine and the DNR-LNR, in which the breakaway republics enjoy complete political, cultural, and economic autonomy, receive no financial subsidies from Kiev, and have no authority to meddle in Kiev’s affairs.

Although all parties could claim victory in this scenario, the arrangement would be intrinsically unstable and would probably revert to some form of frozen conflict after a few months or years.

There is a third, less likely alternative, but one that Putin and his parent organization, the KGB, have effectively practiced.

A loose cannon such as Zakharchenko may easily lose his usefulness to the Kremlin and become a serious problem.

The DNR’s leader may thus want to keep in mind the sad fate of another Alexander—Litvinenko—the FSB officer who was poisoned and died in London in 2006.