Ukrainian Rebels Grow Restless Amid Cracks In Alliance With Russia 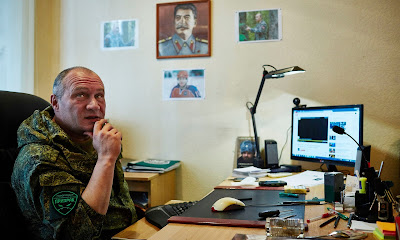 Ghost brigade commander Yuri Shevshenko in his office, with portraits of his heroes on the wall.

In this former KGB complex in the industrial town of Alchevsk in the self-declared Luhansk People’s Republic, members of Shevchenko’s militant Ghost Brigade are growing restless as a shaky ceasefire holds in eastern Ukraine.

With their Russian backers turning their attention to the war in Syria, cracks are appearing in the rebels’ alliance with Moscow.

The Kremlin is reportedly pressing the militants to put the conflict on ice, at least for the time being.

Some in the east feel abandoned, stuck between Syria and a ceasefire they are reluctant to respect.

Fighters insist that the war is not over – it’s only the tactics that have changed.

“Our republic is not yet independent – it depends on help from Russia,” said Aleksey Markov, a nuclear physicist from Moscow and Shevchenko’s second-in-command.

“We must first take more land, more industry, more cities. Only then can we finish the war.”

“The Kremlin tells us: ‘An offensive would be bad politically. Wait. Otherwise we won’t send our white trucks’,” he said.

“Without their help, civilians will starve.”

Shevchenko’s rebels are keen to launch a new push to consolidate their breakaway territory.

“We get help from the Russian people but the Kremlin is ignoring us,” he said.

The unit’s leader, Shevchenko, is a former Soviet soldier who later worked in customs.

He became commander of the Ghost Brigade when his predecessor, a local maverick and Soviet idealist called Aleksey Mozgovoy, was killed in a roadside ambush in May.

In a corner of the conflict, criss-crossed by rebel factions, Shevchenko knows he could be next.

“It happened to him, it can happen to me. But I’m very philosophical about death.”

After Mozgovoy’s death, some blamed forces loyal to Ukraine.

But there were also rumours of an enemy within – rebel chiefs taking out rivals to bolster their own power.

“We need a court to find the truth,” he says.

“We have our own investigation. There is nothing more to know until that is complete.”

The commander’s rebel stronghold is just 40 miles from the Russian border.

Drab, Soviet-era blocks rise from the rolling steppe on the town’s southern flanks.

To the north, a coke furnace and steel works dominate the landscape.

The ranks of the Ghost Brigade are drawn from disparate regions of Russia, Ukraine and even western Europe.

They occupy a stretch of the front running through the deserted village of Jolobok, ruined by months of shelling.

Now, calm has been restored - punctuated by the sporadic rattle of gunfire.

The rebels on front-line duty endure poor conditions, set to worsen in winter.

They live in abandoned, rubble-strewn houses and slip through alleyways to avoid sniper bullets.

Food is prepared in a derelict yard next to an exploded shell.

“It’s very frustrating,” says Markov as he inspects the front.

“Many are volunteers, often they go home. We lose them and we have to start from scratch.”

A short walk away over shattered glass, shell craters and a child’s sandpit, a middle-aged soldier placidly cleans his machine-gun in a firewood shed, just a few hundred metres from Ukrainian positions.

Despite their plight, the couple are sanguine.

“This is our land, our home,” says Olga.

“There’s nowhere else to go. We have a saying, ‘If you survive for three days, you become a guest of the war’.”

Their rusty metal gate, ruptured by shrapnel and scrawled over with chalk, doubles as a tab system for rebels yet to pay for their milk rations.

Nina, the elderly matriarch, rests against a wall.

“I can’t describe the pain in my head when the bombs come,” she says.

“I’m an old woman and never expected to end my life like this.”