November 07, 2015
KIEV, Ukraine -- A Ukrainian court on November 6 ordered the arrest of former Justice Minister Olena Lukash on corruption charges, a day after she was detained in connection with an investigation into deadly Maidan shootings of February 2014. 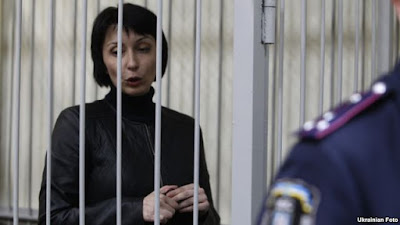 Olena Lukash in a Kiev court on November 6.

The charges against Lukash include misappropriation of state funds worth about $2.5 million, as well as forgery and abuse of her office.

The November 6 arrest order by Kiev's Pechersky District Court granted her the possibility of paying bail of 5.1 million hryvni ($221,000) within the next five days.

Prosecutor Vladislav Kutsenko says Lukash was not being charged in connection with the Maidan shootings during opposition protests in 2014 that brought down the pro-Russian government of then-President Viktor Yanukovych.

However, Kutsenko said Lukash was being questioned as a witness in that case.

More than 100 people were killed on and around Kiev’s central Independence Square -- known as Maidan Square -- by sniper fire from February 18-20, 2014.

An ongoing Ukrainian investigation has not yet identified who was behind the attacks.

Lukash served as Ukraine's justice minister in 2013 and early 2014.

She was dismissed on February 27, 2014, days after Yanukovych was toppled from power and fled to Russia.

In February 2015, Ukraine's prosecutor-general requested that the Interior Ministry and Ukrainian Security Services arrest Lukash on suspicion of involvement in masterminding the shootings of antigovernment protesters.

In May, the Prosecutor-General's Office filed charges in absentia against Lukash for the alleged mismanagement of public funds, forgery, and abuse of office.

Lukash said on November 6 that she was certain her friends would deposit her bail and that the court would ultimately acquit her of the corruption charges.

She also said she considered the court order for her arrest to be unfounded.