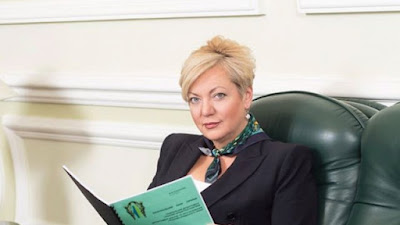 The central bank is trying to balance a shrinking economy and inflation which Bloomberg reports is the second fastest in the world, behind Venezuela.

"Ukraine's annual inflation is expected to jump to 46 percent, of which 19 percent result from gas and electricity tariff increase, while the rest is the effect of the devaluation," Hontareva said.

But Hontareva said signs of economic recovery were emerging.

Gross domestic product rose in the third quarter and is projected to expand 2.4 percent in 2016, she said.

In the coming weeks Ukraine is expected to receive the next tranche of an International Monetary Fund bailout triggering a "significant" increase in international reserves, Hontareva said.

But the IMF is predicting the Ukrainian economy to contract 9 per cent this year.

World Bank warned last month that a full economic recovery would depend on more radical reform and a much more concerted effort to combat corruption.

October's local elections indicated Ukrainians are losing faith with their government's ability to rescue the country from economic crisis.