November 29, 2015
KIEV, Ukraine -- Ukraine on Saturday held a day of mourning for the millions of victims of a Soviet-era famine, with President Petro Poroshenko describing it as an episode in the "war waged by Russia against Ukraine." 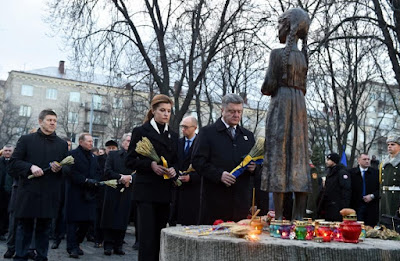 Ukrainian President Petro Poroshenko (C) and his wife Maryna lay spikelets of wheat in memory of the victims during a ceremony at the Holodomor famine memorial in Kiev on November 28, 2015.

Poroshenko, accompanied by Prime Minister Arseniy Yatsenyuk and hundreds of Ukrainians, laid symbolic wheat ears and lit candles before the Holodomor -- or "death by hunger" -- monument in central Kiev.

The 1932-33 famine happened as harvests dwindled and Josef Stalin's Soviet police enforced the brutal policy of collectivising agriculture by requisitioning grain and other foodstuffs.

But the Western-backed president dubbed it one of the darkest pages in the country's history and "a manifestation of a centuries-old hybrid war waged by Russia against Ukraine" as part of a bid "to destroy the Ukrainian nation."

The "hybrid warfare" is a term widely used by Kiev and its Western allies to describe the armed conflict in eastern Ukraine between the government troops and pro-Russian separatists that killed over 8,000 since its outbreak in April 2014.

Kiev and the West accuse Moscow of instigating the conflict by providing rebels with military support and deploying its regular troops.

Moscow continues to lie and denies any involvement in the conflict that broke out a month after Russia annexed the Crimean peninsula following the ousting of a pro-Russian president as a result of massive pro-Western protests in Kiev.

For "21 months Ukraine fights against Russian aggression. Russia's hate towards Ukraine and its desire to destroy Ukrainian people remain unchanged," Poroshenko said minutes before the country held a minute of silence.

"I am convinced that the famine would not have occurred if we had not lost our independent state in the 1920s."

According to the latest studies, some 80 percent of Ukrainians regard the Holodomor as a genocide specifically aimed by Stalin's regime at eradicating the potentially awkward Ukrainian peasantry.

The magnitude of the death toll remains hugely controversial among historians, with estimates of those who died in Ukraine ranging from five million to nine million.

Ukraine has remembered the victims of Holodomor on the fourth Saturday of November since 1998.