November 12, 2015
KIEV, Ukraine -- This spring, Ukraine’s government decided to purge the country of its Soviet past. 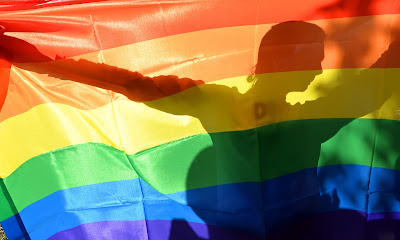 Ukrainians had a revolution to move closer to Europe. But they’re not ready to embrace European values.

All through the land, chisels and winches went to work chipping away Communist symbols and toppling Lenin statues by the dozens.

But the Soviet dictatorship was composed of more than stone.

It was also an ideology, the chief component of which was a callous disregard for human rights.

Recently, however, the Rada, Ukraine’s parliament, proved that this part of its Soviet past is very much alive in modern Ukraine.

On Nov. 10 the Verkhovna Rada refused to pass a law that would have allowed Ukrainian citizens to have the long-awaited privilege of visa-free travel in the European Union.

The reason behind the legislation’s resounding defeat?

A provision preventing discrimination against gays in the workplace.

This provision, which is a precondition for visa-free travel set by the EU, ignited a vociferous outcry, and ultimately turned into a red line which the Rada refused to cross.

“As a country with a thousand-year-old Christian history, we simply cannot allow this,” is how Rada deputy Pavlo Unguryan, a member of Prime Minister Arseniy Yatsenyuk’s own party, explained it after a previous attempt to pass the legislation on Nov. 5 failed.

This isn’t the first homophobic news to come out of Ukraine this year:

In July, when a pair of gay activists decided to test the extent of Ukraine’s new Western values by holding hands in the middle of Kiev, they were quickly assaulted by thugs.

On Nov. 2, the Kyiv Post profiled Mykola Dulskiy, the founder of a vigilante group called Fashion Verdict, whose mission, according to the article, is to “sweep promiscuity, gambling, sexual offenders and homosexuality from the streets of Ukraine’s cities.”

The “verdict” is delivered in a rather straightforward manner:

Members of the organization track down and beat anyone they deem degenerate.

But the damage caused by the Rada’s refusal to pass anti-discrimination laws extends far beyond generating just one more negative headline for Ukraine.

It undermines the two biggest factors that enabled the country to survive the horrors of the two previous years:

Western support and the dream of European integration. EU association is the issue that ignited Ukraine’s Euromaidan revolution in November 2013.

“Ukraine is Europe” was the rallying call for the hundreds of thousands who flocked to Kiev bearing EU flags following then-president Viktor Yanukovych’s decision to go against the will of his people and cast Ukraine’s lot with Russia.

Today, billions of dollars, over 2 million refugees and internally displaced persons, and thousands of lost lives later, a new group of politicians is once again dealing a blow to the dream of EU integration — all in the name of homophobia.

Some politicians, such as Oksana Syroyid, the Rada’s deputy speaker, hinted in a Nov. 9 remark that the anti-gay discrimination requirement had been suddenly sprung on the Rada.

In reality, the EU made it clear as early as 2010 and continued reminding the Rada of its importance in the lead-up to the vote.

It must also be noted that Moldova — another former Soviet republic mired in post-Soviet corruption and malaise — already enjoys the privilege of visa-free travel because it managed to pass a similar law.

For the past two years, Ukraine has asked the West to provide it with billions of dollars, material support, and training, as well as to enact and sustain sanctions against Russia — sanctions that hurt not only the Russian economy but also the economies of Western Europe.

Time and again, Ukrainian politicians fought to keep themselves at the forefront of Western agendas by reminding the West that Ukraine has been fighting not just for its sovereignty, but also for democratic values.

“We have shown the world the true face of our nation, one that fights for European values and defends European security on its frontiers,” Ukrainian President Petro Poroshenko wrote in a June op-ed in the Wall Street Journal.

This notion of a land struggling to escape its Soviet past and break out of Russia’s orbit is behind everything the West has invested in Ukraine.

By turning down the chance to pass reforms that would enable visa-free travel to Europe, the Rada undercuts the very EU and American support that is keeping Ukraine alive.

This couldn’t have come at a worse time.

Over the past several months, public statements by American leaders, including Vice President Joe Biden and Geoffrey Pyatt, the U.S. ambassador to Ukraine, have made it clear that Kiev’s window of opportunity to battle the corruption that continues to plague the ex-Soviet republic is growing smaller.

Europe, already strained by dealing with the Syrian refugee crisis and rehabilitating the Greek economy, is also running out of patience.

“You keep reforming and we will keep supporting. That is the contract we are making with you,” is how Jean-Claude Juncker, president of the European Commission, put it during a visit to Kiev earlier this year.

There is a not-so-veiled flip side to that statement:

You stop reforming, we stop supporting.

When it comes to explaining the glacial pace of Ukraine’s anti-corruption reforms, the Rada has excuses — the country is involved in a war with Russian-backed separatists, the entire system needs to be changed, old views must be rooted out, and so on.

But when it comes to throwing away the privilege of visa-free travel to Europe, the Rada has no excuse.

It should not, therefore, be surprised to discover that Europe (which has a history of Christianity at least as long as Ukraine’s) has no time for a country that places a higher value on discrimination than European integration.

The ultimate irony in all this is that Eastern Europe already has a country with organizations of homophobic thugs and politicians who use conservative Christian traditions to justify an atrocious record of violating the rights of the LGBT community.

That is the very country Ukraine is trying to separate itself from: Russia.

In perusing websites and statements by both Russian and Ukrainian far right groups and politicians, one is stunned by the identical tone:

Both invoke the imagery of a nation with “a thousand-year history of Christianity” battling back the encroachment of decadent Western values in order to justify their cause.

Both insist that their country can have a future only once it is cleansed of “foreign” influences.

The only difference is, one set of slogans is written in Russian, the other in Ukrainian.

Last year, as the conflict between Ukraine and Russia heated up, a controversial political cartoon appeared on the Internet.

In it, a young woman wearing the white, blue, and red Russian flag colors is comforting what appears to be a younger sister dressed in the yellow and blue of Ukraine’s flag.

Over the past two years, Ukraine has been fighting to prove that offensive cartoon wrong, to show the world that Ukraine is more than Russia Junior, and that Ukraine belongs in the West.

Ukraine’s politicians just squandered the opportunity to justify the bloodshed and horror that so many of their people have endured over the past two years. Instead — and in spite of their loud declarations of being European — they chose to embrace homophobia, placing themselves firmly in line with Russia.

Big sister would be proud.