Two Years After Ukraine’s Euromaidan, Protesters Say 'Nothing Has Changed'

November 22, 2015
KIEV, Ukraine -- Exactly two years after the beginning of the Euromaidan protests that toppled Ukraine's government, a cluster of demonstrators stood under black umbrellas along a barricade on a street known by many in Kiev as "Heroes Alley." 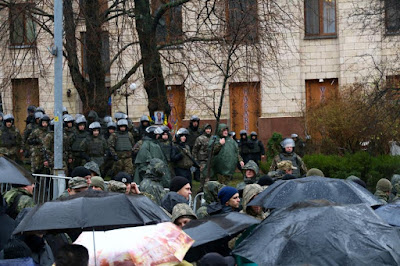 Soldiers block protesters from approaching the "Heavenly Hundred" memorial in Kiev on Saturday.

Police in riot and army gear stood on the other side of the barrier, stopping people from approaching a memorial to the "Heavenly Hundred," the men and women killed by sniper fire during the unrest that preceded the Ukrainian revolution.

The rain pelted down on the group of roughly 200 protesters, who sporadically chanted anti-corruption slogans as they waited for the arrival of Ukrainian President Petro Poroshenko on Saturday.

After last year, when Poroshenko was booed and heckled during a wreath-laying ceremony, the chanting demonstrators were kept far away from the memorial and only people on a preordained list were allowed through the barriers.

"Look how many police there are for just some of us," said Olena, a woman who travelled overnight from Zhmerynka region of Ukraine to be at the anniversary.

"I wanted to make my voice heard," she said.

"People do not have satellite television, they believe what they are told about Poroshenko doing what he promised."

Poroshenko's advertised arrival time of 1pm came and went, and the rain started to drive away the disgruntled crowds.

It was a far cry from the fierce protests that had filled Maidan two years before, when students began a demonstration against the government's refusal to sign a declaration that would bring the country closer to the European Union.

Police and security forces responded with violence, leading to months of rallies on the Maidan.

The 2013 protests continued into 2014, culminating with three days of extreme violence that began on February 18 and left more than 100 dead.

President Viktor Yanucovych ultimately stepped down and fled to Russia, triggering an ongoing conflict that led to Russia's annexation of Crimea and Russian-backed separatists forming breakaway republics in eastern Ukraine.

Two years later, there are still no answers as to who was responsible for the deaths.

Additionally, many Ukrainians feel let down by Poroshenko's government, which has not delivered the anti-corruption changes it promised in the wake of Euromaidan.

"The country is still ruled by corruption," Olena said.

"It is still the same people in power, nothing has changed."

The president's official website said that while Poroshenko talked to the families of those who died, he "stressed that all those guilty of crimes against the activists of the Maidan will not escape justice."

Metro stations near "Heroes Alley" were closed off until after the politicians had finished their visit, and many people who had been at Maidan during the worst of the violence were kept away from the official ceremony.

Kateryna Kruk said she was on Maidan at the peak of the violence last year.

She said that what started as a people's revolution has been taken over by the political elite.

"Poroshenko wasn't on Maidan on February 21. I was," Kruk said.

Away from "Heroes Alley," a massive stage was set up in preparation for a concert later in the evening.

The sound and light tests give Maidan an atmosphere more similar to a festival than a commemoration.

On the same part of the square, people who were at the Euromaidan protests were also apparently banned from putting up stages on the square itself, despite having the correct permits.

"It was supposed to be a day of dignity and freedom," Kruk tweeted alongside a picture of armed guards at the barricade.

"Is this how authorities understand those words? I am so disappointed."

"Once again I am standing in the rain next to the police," she said.

"Some things never change on the Maidan."

Unknown said…
Below is a quotation from the comments by President Poroshenko:

Unknown said…
This comment has been removed by the author.
11:24 PM

Unknown said…
Ukrainian Government should start moving in the direction of increasing revenue so, there will be more sufficient fund for public sector, social projects and to increase wages of government workers. What are the steps? Mineral resources with strategic importance must be identified and part of those resources must be set aside for the government development through government procurement, some less lucrative should be privatized. It is important to work out a safe guard system which will allow to enforce government embargo on strategic mineral which will be placed on some countries in case of a war or international obligations. Good example of such mineral could be titanium. During the soviet time Ukraine had end cycle for mining and processing of titanium, it is a strategic metal. If such end cycle is created again Ukraine would be able to control 40% of the world marked of titanium. It would be one of the leverages to use on international arena. Now ore is exported to the country aggressor such as Russia and Russia has such leverage when it comes to aircraft building. In the sense airplanes build out of our ore could end up bombing Ukrainian cities, God forbid. So, some of generated income from privatization should be allocate for investing in such strategic area and foreign reliable investors from the friendly country should be invited to participate.
11:28 PM