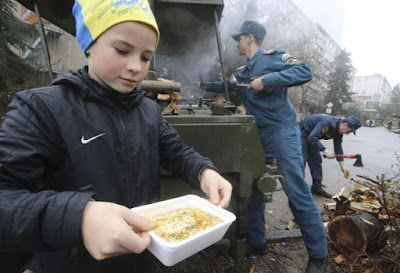 A boy carries a container with soup as he visits a mobile station, opened and operated by members of the Russian Emergencies Ministry to lend support and to distribute hot meals among local residents due to power cuts in the settlement of Massandra, Crimea, November 27, 2015.

He said Kiev had one month of its own coal supplies left and was seeking alternative supplies from South Africa.

"Coal supplies have been restricted from uncontrolled territory (Donbass) and from Russia," said Demchyshyn.

"Right now our power stations have enough coal reserves in storage to last for at least one month. But in the long-term problematic questions will arise."

Russian Energy Minister Alexander Novak said on Tuesday that Russia might cut coal supplies to punish Ukraine for what he said was its deliberate refusal to help rebuild power lines to Crimea, which were blown up by unknown saboteurs.

Minor repair work has been carried out on the sabotaged pylons and power lines in southern Ukraine which supply Crimea, but none of the four pylons which were destroyed are operational.

Ukraine depends on coal to fulfil around 44 percent of its power needs.

Nuclear energy makes up about the same proportion, with the rest of its needs being met by renewable sources.

Demchyshyn said two ships carrying coal from South Africa were en route to Ukraine and would dock in December with around 250,000 tonnes of coal.

Taken together with Ukraine's own coal reserves of about 1 million tonnes, he said Kiev had enough coal to ensure the stable functioning of its energy system for 45-50 days.

He said Ukraine was in talks with South Africa about further coal supplies.

Ukraine earlier this week said it was halting gas purchases from Russia.

Demchyshyn said Ukraine had 16.5 billion cubic meters of its own gas in reserve, enough for the winter heating season.