Russia Opens Fire On Ukraine Again As The West Stands By

November 20, 2015
KIEV, Ukraine -- In the six months after a cease-fire in eastern Ukraine was supposed to have taken effect this year, Russian-backed forces kept up a low-level barrage of sniping and shelling along the front lines, killing dozens of Ukrainian soldiers while avoiding censure from the Western governments that brokered the deal. 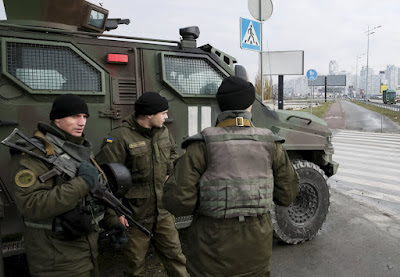 Members of Ukraine's National Guard stand near armoured personnel carrier as they patrol an area in Kiev on Monday.

Then, on Sept. 1, the guns fell silent — just as Russian forces began streaming into Syria.

For two months, the cease-fire held and international monitors reported progress in implementing agreements on the withdrawal from the front lines of heavy weapons.

In the past week there have been dozens of incidents daily in which the supposedly withdrawn weapons, including heavy mortars and Grad rockets, have been fired at Ukrainian positions.

Having proved in September that he could switch off the shooting in Ukraine when it suited him, Russian President Vladi­mir Putin has now, at a minimum, allowed it to resume.

It’s a development that Western governments contemplating an alliance with the Russian ruler in the Middle East cannot afford to ignore.

Why would Russia have broken the calm in Donetsk and Luhansk provinces, where it controls a force of some 40,000 fighters armed with advanced tanks, artillery and electronic warfare systems?

Some Ukrainian officials speculate that Putin might be seeking to disrupt free-trade and visa-liberalization agreements between Ukraine and the European Union, which are due to take effect shortly.

Others believe the military pressure is meant to induce Ukraine, Germany and France to capitulate to Moscow’s demands in ongoing negotiations over a political settlement in the region.

What’s clear is that Putin has not given up his objective of restoring Russian control over part or all of Ukraine.

He still seeks to undermine the pro-Western government in Kiev; this week the Kremlin announced a ban on Ukrainian food imports.

Through the peace talks, Putin is attempting to force Ukraine to accept the authorities he installed in the territories captured by Russia and to rewrite the constitution to give them special powers.

Meanwhile, he uses his military forces to probe and pressure.

Ukrainian officials suspect that Putin’s offer to ally with the West in the Middle East may be part of this game.

The price for cooperation with France and the United States in Syria, they worry, may be concessions on Ukraine — such as the lifting of E.U. sanctions imposed on Russia after its invasion, which will lapse in January if not renewed.

European officials have said the sanctions will remain in effect until the peace agreement, which calls for Russian forces to withdraw, is fully implemented.

But that was before the terrorist attacks in Paris and French President François Hollande’s decision to reach out to Putin.

The resumed shooting by Russian forces in Ukraine does not appear to have slowed Mr. Hollande’s initiative.

If Western governments ally with Russia in Syria even as its forces attack Ukraine, they will be tolerating and even encouraging Putin’s aggression.