November 13, 2015
MOSCOW, Russia -- To understand how Russia conducts its foreign policy, simply look at what the Kremlin accuses everyone else of doing. 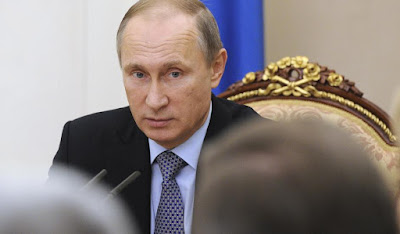 Russian President Vladimir Putin chairs a meeting with members of the Security Council at the Kremlin in Moscow November 6. To understand how Russia conducts its foreign policy, simply look at what the Kremlin accuses everyone else of doing.

Unlike the Soviet Union, which operated under a coherent ideology, the Russian government under President Vladimir Putin seems to believe that everybody is a cynical power player, and that the West is simply hypocritical about it.

According to this view, Western support for Ukraine has nothing to do with standing up for the values of democracy and liberty, but rather is part of a geopolitical struggle aimed against Russia.

Hence the belief that the Euromaidan was a "Western plot."

This view drives the Kremlin's actions.

After all, if destabilizing countries through dirty methods like plots or even terrorism is something "everyone" does, then there's nothing strange about Russia doing it as well.

Putin apologists in the West, such as New York University Professor Stephen F. Cohen, often argue that Russia is an important partner in the struggle against terrorism.

The separatist groups Moscow is supporting in the Donbass would no doubt be labeled terrorists had they tried to separate from some Russian province.

But Russia's plot hasn't worked according to plan.

The separatists only control a small part of Ukrainian territory, and Russia has paid a high price in the form of economic sanctions.

But even though fighting seems to have died down in the Donbass and the Russian military has turned its attention to Syria, Putin certainly hasn't forgotten about Ukraine.

The country is simply too important for that.

Euromaidan Press recently published a list of the Kremlin's other separatist projects in Ukraine.

One of the most active organizations is the Kharkiv Partisans, which operates in northeast Ukraine.

The group has claimed responsibility for several IED attacks on both people and infrastructure in the area.

Its leader, Oleg Sobchenko, lives in Russia and claims to be a Soviet Army veteran who served on the Afghan border.

In Odessa, a group known as the Odessa Underground states that it's behind a similar string of terrorist attacks there.

And the Ukrainian security service, the SBU, claims to have foiled a terror attack on a recruitment center in Kiev on October 14.

The cell behind the attempted attack was allegedly controlled by Russian security services and led by Alexei Selivanov, a pro-Russian Ukrainian citizen from Odessa who was previously involved with pro-Russian Cossack groups.

It's not clear if these organizations are real terrorist groups, or if they are just a cover for Russian intelligence or their proxies in Ukraine.

But in either case, Kiev had better prepare to fight this new "shadow war."

In early October, a YouTube video showing the training camp of a Russian irregular outfit that calls itself ENOT (Racoon) featured Alexander Borodai, the former prime minister of the so-called Donetsk People's Republic.

This unit fought in the Donbass and has a lively presence on social media.

Interestingly, according to the video and the website advertising it, the training took place in cooperation with the St. Nicholas-Berlyukov Monastery, which is located to the east of Moscow; in the video, a priest can be seen blessing the participants.

Russia claims to be fighting religious terrorism in Syria, but apparently has no problem endorsing it at home.

Putin's campaign of supporting separatists is perfect in many ways.

The groups are difficult to trace to Russia and any connection can be easily denied by the Kremlin.

After all, the Kremlin has continuously denied any involvement in Ukraine at all. Just as important, the actions of these Kremlin-supported groups suggest to Ukrainians that their government is not in control of the situation.

One of the Putin regime's main selling points is that the only alternative to an authoritarian system is chaos.

This terror campaign makes it possible for Putin to say things like, "Look what happens when you get rid of a strong leader: Chaos!"

Never mind that he is the one creating the chaos.

As Timothy Snyder shows in his excellent book Bloodlands, the result of Nazi and Soviet occupation in Eastern Europe was a society resembling something out of Lord of the Flies.

Many Eastern Europeans therefore fear anarchy and disorder, and some believe avoiding it is worth the price of an authoritarian system.

The Kremlin is, of course, terrified that a successful Ukraine would set a very different example for the Russian people, and no method of opposing it seems to be too ugly.