Organizers Hope To Educate With Ukrainian Memorial In D.C.

November 09, 2015
WASHINGTON, DC -- Russian Communist ruler Joseph Stalin starved millions of Ukrainians in the 1930s, to enforce his rule on the region and prevent uprising, but to this day the government denies that the genocidal famine even occurred. 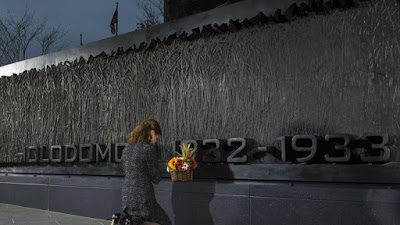 First lady of Ukraine Maryna Poroshenko presents flowers during the unveiling and dedication of the Holodomor Memorial in Washington, D.C.

But a memorial unveiled Saturday will place the story on prominent display to the millions of people who walk the streets of Washington, D.C., each year — and organizers, including a Baltimore County man, hope to make sure those who died are not forgotten.

"That is why we are here, to raise awareness," said Andrij W. Chornodolsky, who lives in Timonium and was involved with the committee behind the memorial, as well as an exhibit.

"We should never forget about the senseless tragedy and loss of lives."

The exhibit, at North Capital Street and Massachusetts Avenue near the Union Station transportation hub, depicts wheat growing in a field.

But as you walk further down the exhibit the crop gradually fades away — depicting how Stalin slowly erased a whole culture.

The name of the memorial: Holodomor Memorial, which means "murder by starvation."

Wheat was a major crop and economic engine of Ukraine at the time, and the country was known as the breadbasket of Europe.

Stalin created export quotas on farmers that, once met, left no food to feed their own families.

Enforcers searched and ransacked homes to make sure people complied.

Sometimes, Ukrainians burned their own crops and killed their cattle in acts of defiance.

One-third of the millions who died were children.

"Today we are lighting the way for people still uninformed about the truth," Rep. Sander Levin, a Michigan Democrat who introduced the legislation to get the memorial built, told a large crowd of Ukrainians who came to Washington for the ceremony.

People traveled by bus from the Baltimore area as well as from New Jersey, New York and Michigan.

They wore traditional Ukrainian shirts with colorful embroidery on the collar and sleeves.

Some flew the gold (for wheat) and blue (for the sky) Ukrainian flag or displayed the trident, the traditional coat of arms of Ukraine.

They sang both the American and Ukrainian national anthems.

The first lady of Ukraine, Maryna Poroshenko, told the crowd:

"We cannot turn back the hands of time, but we can keep the memories in our hearts."

Most who attended had not lived through the tragedy, but said the stories shaped their lives.

Architect Larysa Kurylas, who designed the memorial, first heard about the genocide from a Ukrainian schoolteacher in seventh grade and later while studying architecture at Harvard.

The story has stuck with her in a personal way ever since.

"When I heard about the project, I felt duty-bound to participate," she said.

The country's independence is still threatened by Russia, many of the speakers said.

Kwitka "Kit" Paschyn traveled from Annapolis to attend the ceremony.

Her family left Ukraine for the United States when she was 9 months old.

While they grew up in the western part of the country, not the east where the genocide took place, they still feel a connection to the atrocity.

"It took so long for anyone to recognize what happened," she said.

Paschyn wants to make sure the next generation of Ukrainian Americans understands what happened to their ancestors.

Her 14-year-old granddaughter, Maryna Chuma, came from Philadelphia for the unveiling.

She learned about the genocide in Ukrainian school.

"It was a very important event that happened in Ukrainian culture and history and we must remember it," she said.