November 12, 2015
KIEV, Ukraine -- Fighting broke out in eastern Ukraine on Tuesday killing one soldier and wounding five as the country's armed forces and pro-Russian rebels have accused each other of firing first. 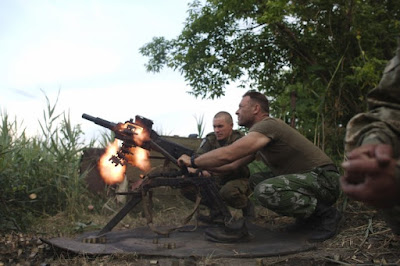 Members of the Ukrainian armed forces fire a grenade launcher, in response to what servicemen said were shots fired from the positions of fighters of the separatist self-proclaimed Donetsk People's Republic, in the town of Avdiivka in Donetsk region, Ukraine, June 18, 2015.

"Over the last day, terrorists have continued attacks our positions at Artemovsk and Donetsk," the command of Ukraine's Antiterrorist Operation (ATO) reported on Wednesday via its Facebook page.

The statement detailed an attempted attack by a reconnaissance group of "Russian mercenaries," reportedly from the Donetsk People's Republic (DNR).

The fighters approached the village of Novoazvanovka in Luhansk region around 10 p.m. on Tuesday, according to the statement, before Ukrainian defence forces opened fire on them.

The Ukrainian side gave no estimates as to how many rebels were wounded or killed during the attack.

The violence was the most serious outbreak of violence since September when Kiev and the rebels renewed their commitment to a ceasefire.

Although reports of Tuesday's clashes are the most significant flare-up in more than two months, it still a far cry from the stretches of escalating violence endured over the summer such as the rebel push for the town of Marinka in June.

Later that month NATO issued a warning of a potential return of "heavy fighting" in Ukraine and by the first week of July Kiev reported 100 ceasefire violations in one day.

The ceasefire demands that both sides pull back heavy arms from the contact line and cease armed advances on enemy-held lands.

The deadline for the implementation of the ceasefire objectives is the end of the year.

It said that rebels fired small arms and mortar shells toward the towns.

Peski is of particular significance due to its closeness to the port stronghold of Mariupol.

The city is one of Donetsk region's biggest and DNR leader Alexander Zaharchenko has repeatedly pointed to it as a target for the group's advances.

Later in the day during his daily press briefing on the situation in the east, ATO spokesman Andriy Lysenko said that rebels had committed 21 violations of the ceasefire between the two sides on Tuesday, killing one Ukrainian soldier and wounding five others, Ukrainian news agency UNIAN reports.

Meanwhile DNR rebels accused Ukraine of violating the ceasefire as the so-called Ministry of Defence of the separatist group said they counted 10 different occasions of open fire towards rebel-held lands from the Ukrainian-held side, rebel news agency DNA reported on Wednesday.

According to the group it was Ukraine who attacked their checkpoint near Novoazovsk, in the town of Shank.

Later on Wednesday the self-styled minister of defence of DNR, Edward Basurin also told DNA that according to rebel intelligence, Ukraine had sent 22 howitzers near the contact line with rebel forces, northwest from the rebel-held city of Donetsk.