November 28, 2015
LONDON, England -- Russian leaders have evidently been shocked by Turkey's deliberate decision to shoot down one of their planes, which they say was motivated by Turkey's alleged support for Islamic State and greed for the proceeds of smuggled terrorist oil. 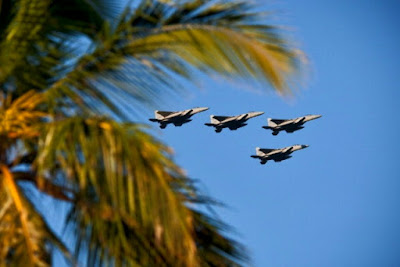 A simpler explanation is that Russia would have done the same.

Here is the hypothetical:

What would President Vladimir Putin do if civil war broke out in a neighboring country, which had been part of the Russian empire for centuries before breaking away under circumstances, and with borders, that Russians still found difficult to accept?

What would he do if, in that war, some of the rebels were ethnic Russians at risk of being brutally crushed by the armed forces of the neighboring state?

Actually, that's not so hypothetical; it pretty much describes eastern Ukraine.

And we know what Russia did -- it became heavily involved in a poorly concealed invasion.

Syria was under Ottoman control from 1516 until the collapse of the Ottoman Empire.

The Russian Empire took over the Donbass region in the mid-1700s.

The "Turkmen" rebels that Russia's Su-24 aircraft was bombing at the time it was shot down are ethnic Turks.

They ended up on the wrong side of the border when it was imposed by a 1921 treaty (shortly before the Donbass region was incorporated into Soviet Ukraine).

Even the strange psychology of how former empires feel they still have a special right, even responsibility, to intervene in long-since amputated parts is similar.

When pro-democracy protests began in Syria in 2011, Erdogan said Turkey had to view the turmoil in Syria as a domestic issue.

He was affronted when President Bashar al-Assad refused to do as he was told.

Since the shoot-down earlier this week, Turkey's President has all but admitted that his country deliberately targeted the Sukhoi because of what Russia was doing to the Turkmen rebels.

"We have no intention to escalate this incident. We are just defending our security and the rights of our brothers," Erdogan said.

As aggressive as the Turkish decision to down a Russian jet over a technical, 17-second airspace infringement was, Erdogan has not gone as far as Putin to assert his right to intervene militarily to protect ethnic kin, anytime, anywhere.

Now consider how Putin would react if the U.S. or North Atlantic Treaty Alliance decided to get involved militarily in eastern Ukraine, placing an airbase and Patriot missile batteries 50 miles from the Russian border.

Picture NATO aircraft providing airpower for an all-out Ukrainian ground assault against the Russian-backed rebels, aided by troops from Poland and Chechnya (in Syria's case, that's Iran and Hezbollah).

Imagine Turkish and American jets flying into Russian airspace as they try to optimize their bombing runs.

Just a wild guess here, but it would not take Putin three months before he shot down one of the NATO aircraft.

Nor would he take seriously any comment from the President of the United States that it was obvious the NATO pilots and bombers had "in no way threatened" the Russian Federation, the words Putin used as he raged that:

“We received a stab in the back from accomplices of terrorism.”

Nor would Putin have been impressed by NATO claims that the Russian-backed rebels it was bombing in the Donbass were terrorists.

Putin says he is bombing Islamic State in the Turkmen mountains, yet there are no recorded Islamic State forces in that area or for some distance beyond.

These are rebels fighting Assad.

Of course, there are as many differences as similarities between the situations in Northern Syria and Ukraine, past and current -- it is the attitudes of Russia and Turkey that are similar, not the conflicts.

And both Russia's leadership and Turkey's are using the cover of popular concern for the fate of fellow Russians and Turks to pursue more strategic, less noble goals.

Among those goals for Erdogan is one that will be all too familiar to the Kremlin:

A determination to show not just Russia, but also the U.S., France and others looking to agree a common strategy with Putin that no solution for Syria can be reached unless Turkish interests are fully taken into account.

These do not allow for an alliance with Assad to crush fellow Sunnis, whether Turkmen or Arab.

The smart thing for Russia to do now would be to recognize that it misjudged Turkish sensitivities, and adjust accordingly.

But it will be tempting to go further, because Erdogan has also miscalculated:

He has a far weaker hand in Syria than Putin has in Ukraine.

To state the obvious, Turkey is not a nuclear power.

In addition, despite huge errors of judgment in supporting Islamist extremists once they arrived in Syria one to two years after the conflict began, Turkey did not manufacture Syria's civil war, as Russia manufactured the one in Ukraine.

Nor have the Turks put large numbers of "volunteer" troops and heavy equipment into the Syrian battlefield.

So Turkey's ability to influence or respond to events in Syria is extremely limited.

In the Donbass region, Putin has been able to turn the conflict on and off, more or less at will.

For the moment, Russian retaliation is shaping up as economic sanctions, deploying additional anti-aircraft missile systems in Northern Syria and, according to some reports, redoubling its bombing campaign in the Turkmen mountains.

Erdogan will be powerless to respond effectively, unless he takes even more reckless risks in a fight he cannot win.