Lavrov Says Ukraine's Minsk Deadlines Should Be Extended Into 2016

November 08, 2015
BERLIN, Germany -- Russian Foreign Minister Sergei Lavrov says it is clear that deadlines on political reforms in Ukraine under the Minsk agreements need to be extended into 2016. 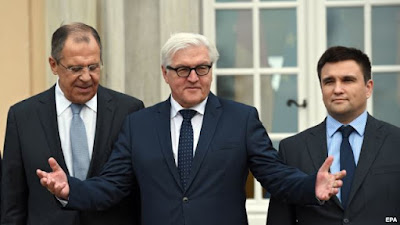 Lavrov issued the statement after meeting in Berlin on November 6 with the foreign ministers of Germany, France, and Ukraine to discuss the next steps toward ending Ukraine’s conflict.

The meeting took place amid a growing awareness that progress on a peace plan has been slower than hoped for in the conflict between Ukrainian government forces and Russian-backed separatists in eastern Ukraine, which has killed more than 8,000 people since April 2014.

The conflict also has soured relations between Russia and the West, which accuses the Kremlin of playing a direct military role in the conflict.

Russia continues to deny that it is sending its troops and weaponry into eastern Ukraine, despite growing evidence to the contrary.

The trust-building pact reached in Minsk has sharply deescalated the violence, but the situation in eastern Ukraine remains fragile.

"We can be glad that the cease-fire regime has been observed to a certain extent."

But he said "some serious challenges" remain, including organizing fair local elections in separatist-held areas of eastern Ukraine.

He said the delivery of humanitarian assistance to eastern regions also is vital.

The chief monitor for the Organization for Security and Cooperation in Europe (OSCE), Ertugrul Apakan, said earlier in the week that the cease-fire has been "largely holding" since September but that the situation remains "volatile."

There have been sporadic outbreaks of violence, but there also have been exchanges of prisoners under the Minsk agreements.

Officials at the Berlin talks acknowledged that on many points, parties to the conflict are lagging behind the timetable set down under the Minsk agreements to end the conflict.

That suggests that the aim of completing all the steps by the end of 2015 is no longer achievable.

The German Foreign Ministry said the withdrawal of heavy weapons from front-line positions in eastern Ukraine was one possible measure that could be considered at the closed-door meeting, with recent progress on withdrawal of small-caliber artillery and mortars serving as a model.