November 04, 2015
KIEV, Ukraine -- Viktor Shokin is the target of an apparent assassination attempt as three shots are fired at his office. 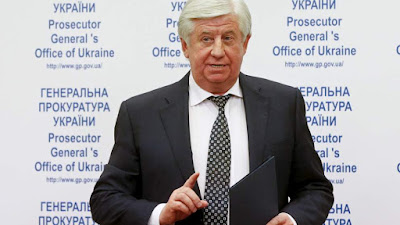 Viktor Shokin was in his Kiev office when the shots were fired.

Ukraine's top prosecutor has survived what could have been an assassination attempt after a sniper fired shots at his window.

Prosecutor-General Viktor Shokin's life was saved by the bulletproof glass at his office in Kiev when the three shots were fired.

No injuries have been reported.

Mr Shokin has been accused of fettering Ukraine's anti-corruption drive as it seeks closer ties with the EU after former President Viktor Yanukovych fled the country April.

At the weekend some 200 protesters in 70 cars marched on Ukrainian President Petro Poroshenko's home calling for Mr Shokin's resignation.

The activists claimed there was a lack of progress over reform of Ukraine's prosecution service, while ringing the door bell and trying to call the president's personal phone, though it was reported the president was not at home.

Police have not made any arrests in relation to the shooting and no group has claimed responsibility.

The shooting happened days after another politician was arrested over what authorities say are several criminal cases.

Hennady Korban, the leader of the country's Ukrop party, was detained by Ukraine's security service.