Why A 'Star Wars' Emperor Won Office In Ukraine

October 27, 2015
KIEV, Ukraine -- Less than two years after Ukraine's "revolution of dignity," local elections on Sunday handed power in the south and east to former supporters of the ousted president, Viktor Yanukovych. 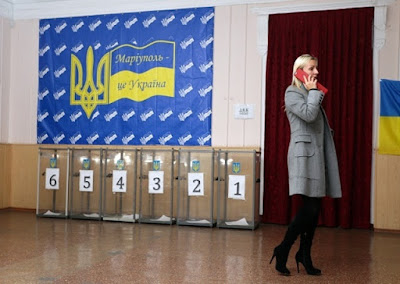 The vote also created sizable ultranationalist factions in a number of local legislatures, including in the capital.

The election proved voters' growing mistrust of the political class, which was only partially reshaped by the revolution, and revealed a disappointed nation that still is divided along an east-west line.

The vote was an important milestone for Ukraine.

President Petro Poroshenko has vowed to decentralize the country by giving cities and communities more political and budgetary powers.

Ukraine is scrapping its system of regional governors appointed from Kiev and giving authority to local legislatures, an attempt to shift from a Soviet-style supercentralized state to a European nation managed from the bottom up.

It's a good idea.

But unless oligarchs and corrupt local bosses are kept out, the country risks getting a version of medieval feudal disunity instead of European self-government.

The elections made that risk palpable.

A year ago, the outcome of Ukraine's first post-revolutionary parliamentary election was worth celebrating:

The remnants of Yanukovych's Regions Party were on the run.

Its successor, the Opposition Bloc, won a plurality in some Russian-speaking eastern regions, but its overall result was less than 10 percent, and it seemed to have only residual influence.

The far-right party Svoboda failed to get into parliament, showing that Ukrainian voters had spurned xenophobic, extreme nationalism.

The victory of the parties of Prime Minister Arseniy Yatsenyuk and Poroshenko was evidence Ukrainians supported their reformist, pro-European orientation.

Enthusiasm faded, however, as Ukraine's economy shrank, oligarchs and corrupt bureaucrats squabbled, and an area surrounding two big cities in the east, Donetsk and Luhansk, remained firmly in the hands of pro-Russian separatists.

Yatsenyuk's party decided not to campaign in the local election because it expected a resounding defeat.

Poroshenko's political force was left with few allies as it tried to consolidate its support on the regional level.

It largely failed, apart from a reluctant alliance with Regions Party veterans in the Russian-speaking part of the country.

The vote count is still underway, but it is clear that the Opposition Bloc and other Regions Party splinters have done better than last year.

That doesn't mean more voters are leaning toward Russia:

The Regions Party was only pro-Russian when it served the economic interests of its leaders.

But Ukrainians seem to have voted for the same corrupt elites that have run their regions throughout the country's 25 years of independence, showing they have little confidence in the reformist rhetoric emanating from the government.

This is especially visible in Ukraine's second, third and fourth cities by population and its most important remaining business and industrial centers: Kharkiv, Odessa and Dnipropetrovsk.

In Kharkiv, a former Yanukovych backer with a criminal past, won the mayoral election by a landslide.

In Dnipropetrovsk, two politicians who don't support Poroshenko will compete in a runoff for the mayoral race.

In Odessa, where former Georgian President Mikheil Saakashvili was appointed as governor to turn the region into a showcase of Western-style reforms, Saakashvili's candidate was defeated by a wide margin.

In the Ukrainian-speaking west, Svoboda radically improved its performance, coming in first in a few regions and second in critically important Lviv, Ukraine's cultural capital.

The ultranationalist party also won a surprising 10 percent of the vote in Kiev.

These results raise concerns there could be a nationalist rebellion against Poroshenko if he's seen as too soft on the separatists in the east.

The Poroshenko bloc has few successes.

In Kiev, its representative, former world boxing champion Vitaly Klichko, will probably hold on to the mayoralty after a runoff vote, and the party has a plurality in the city and regional councils.

A few other central Ukrainian regions leaned its way, too.

Nationwide, the party expects about 18 percent support. It had hoped to get 25 percent, down from almost 22 percent in last year's elections.

To retain a semblance of control over the newly empowered regions, Poroshenko and his team will have to make deals with oligarchs, local barons, nationalist militants and populists.

This will compound the country's barely manageable chaos.

It also will make more difficult an economic rebound or strict adherence to the economic program dictated by the International Monetary Fund as a condition of the country's financial rescue package.

Rooting out corruption now appears a remote prospect at best.

Yet corruption remains the glue holding together the politically, economically and culturally divided country.

Nonetheless, they pointed out "the dominance of powerful economic groups over the electoral process" and "the fact that virtually all campaign coverage in the media was paid for."

No wonder Ukrainians weren't particularly enthusiastic about going to the polls.

The 46.6 percent turnout may seem acceptable by the standards of European and U.S. local elections, but, as commentator Leonid Shvets pointed out, the indifference of half the voters in post-revolution Ukraine signifies "a total mistrust of those who offer their political services."

Perhaps the best symbol of that mistrust and the renewed separation between the state and the people is the election of Dmitri Palpatin to the Odessa city council.

If his last name seems familiar, it is because he officially adopted the moniker of an evil emperor in "Star Wars" (also know as Darth Sidious).

To many voters, the country's politics seem as real as those of a fictional galaxy far, far away.