October 22, 2015
WASHINGTON, DC -- Advanced radar systems being shipped to Ukraine to counter artillery strikes by pro-Russia separatists have been modified to prevent them from peering into Russia, according to U.S. officials. 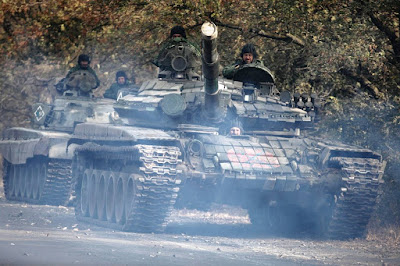 The modifications drew fire from a leading Republican critic of the Obama administration, who called it a misguided attempt to mollify Russian President Vladimir Putin.

President Barack Obama signed an order on Sept. 29 to give Ukraine two radar systems worth $10 million each.

U.S. officials said this week that the systems would arrive at Ukraine’s Yavoriv training ground by mid-November.

U.S. Army officials said they hope the radar would provide Ukraine with a new capability for stopping artillery and rocket attacks launched by separatists.

Other officials said the transfer also would send a message to Kiev that Washington’s support for its security forces remains strong.

But with a cease-fire holding in eastern Ukraine and artillery attacks significantly reduced, the U.S. doesn’t want the equipment to antagonize Russia.

The modifications are supposed to ensure that Ukrainian forces don’t escalate the current conflict by using the new systems to counter fire originating from Russian territory, officials said. Sen. John McCain (R., Ariz.), chairman of the Senate Armed Services Committee, said the modifications to weaken the radar were symptomatic of a “delusional view” by the Obama administration that Putin will modify his behavior in Ukraine.

“This is part of their continuing effort to appease Vladimir Putin,” he said.

“It sends a signal to Russia and Ukraine that we are not willing to seriously confront Vladimir Putin’s aggression.”

Republicans, and some Democrats, have been urging the Obama administration to provide more systems to Ukraine, including Javelin antitank missiles.

The Obama administration has been unwilling to provide any equipment that could be construed as offensive weaponry.

Restrictions on the intelligence the U.S. has provided Ukraine have led to criticism in Congress and in Kiev.

Satellite imagery provided by the U.S. typically only includes Ukrainian territory, obscuring activity and troop buildups on Russia’s side of the border.

Russian officials didn’t immediately reply to a request for comment.

Moscow typically has been critical of American and allied support for Kiev.

The deliveries come as the U.S. steps up training for Ukrainian forces.

The U.S. has been training Ukrainian National Guard units for some time, but those troops generally don’t serve on the front lines.

The training will include six battalions, including five conventional and one special operations force battalion.

The systems, known as AN/TPQ-36 counter-artillery radar, will be given to front-line Ukrainian army troops to use.

U.S. forces plan to begin training on how to use them as soon as they arrive.

U.S. Army officials said the systems will protect against both rocket and artillery attacks.

Army officials identified surplus radar that could be sent to Ukraine last summer.

But the transfer had to be approved by the White House.

The U.S. has spent months vetting Ukrainian units that would use the new systems.

Officials said the vetting took longer than expected but would be complete by the time the radar systems arrive next month.

The radar systems have a range of at least 15 miles, and represent a significant advance from the U.S.-provided Lightweight Counter Mortar Radar systems that Ukrainian forces have been using to pinpoint artillery fire.

U.S. officials said Ukrainians have developed innovative tactics for the use of the lightweight systems, and hope they will do the same with the larger, longer range systems.

But U.S. officials said the new radar are likely to provide a tempting target for any Russian troops active in eastern Ukraine.

U.S. officials said they are worried that Russian forces will target the radar, either seeking to jam or destroy the equipment, and will train vetted Ukrainian forces on how to minimize chances it can be detected by Russian forces.

If Congress approves additional money and the Ukrainians show that they can use the systems effectively, officials said, the transfer of the other four would be considered.