October 31, 2015
KIEV, Ukraine -- A Ukraine soldier died Friday during fighting with insurgents near the shelled-out remains of the airport in Donetsk, a stronghold of the pro-Russian separatists, the army announced. 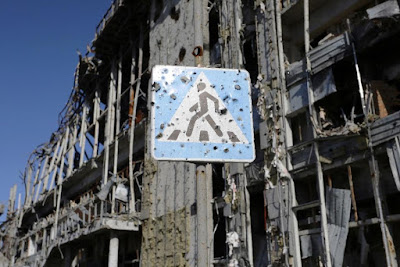 This photo taken on October 13, 2015 in Donetsk shows a bullet-ridden road sign in front of the destroyed Donetsk international airport.

"One soldier was killed and another injured" a military statement said.

Earlier in the day the army reported rebel fire against its positions in the village of Piski, an area controlled by Kiev forces near the flashpoint Donetsk airport which fell into separatists hands in January.

On Tuesday another Ukraine soldier was killed in a mortar fire exchange near the remains of the airport.

Such attacks highlight the fragile nature of the latest ceasefire, in place since September 1, in a conflict which has cost more than 8,000 lives in the past 18 months.

Donetsk airport was for several months the scene of fierce fighting between the Ukraine army and the pro-Moscow insurgents before falling into separatist hands, and remains one of the main flashpoint.

The lull in fighting has raised hopes of an end to one of Europe's deadliest conflicts since the Balkan wars of the 1990s, but the process has been slow and periodic exchanges of deadly mortar fire still flare up.

The sporadic fighting and seemingly irreconcilable differences over the pro-Russian regions' future status within a unified Ukraine means that a peace process that was meant to be finished by the end of the year will drag on into 2016.