October 24, 2015
KIEV, Ukraine -- Amid the backdrop of a violent regional conflict and economic uncertainty, Ukrainians are set to head to the polls Sunday in hotly contested local elections where oligarchs are expected to try to maintain their grip on power. 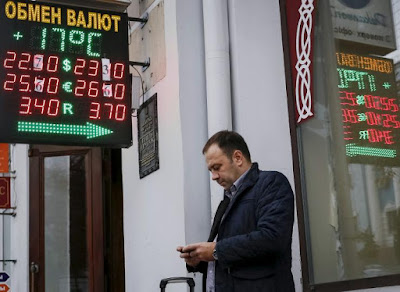 A man stands near a currency exchange office in Kiev, Ukraine, Oct. 19, 2015. Ukraine said it was prepared to battle Russia in court after the Kremlin refused to join a critical debt swap deal for the beleaguered country that has been accepted by the majority of its other creditors on Oct. 15.

With the ongoing war in the east and the country’s gross domestic product forecast to fall by 12 percent by the year’s end, questions about potential voter turnout, eligibility issues and political corruption loomed large ahead of the elections for mayors and city and regional councils as Ukraine undergoes difficult reforms.

How citizens cast their ballots is likely to serve as a referendum on the government of President Petro Poroshenko who has seen his popularity drop.

Members from the party of former deposed President Viktor Yanukovych, now rebranded as the Opposition Bloc, could gain seats as the government undertakes slow economic reforms that have left the population frustrated.

“People are angry, disappointed and blaming the current government for many of their woes,” said Alexander Motyl, a professor of political science at Rutgers University in Newark, New Jersey.

“The opposition should have a decent showing and that should put the fear of God into the government.”

Ukraine has faced more than a year and a half of political and economic uncertainty following the Russian annexation of the Crimea peninsula in March 2014 and the subsequent start of a war in the industrial Eastern Donbass region that has pitted Ukrainian government forces against Russian-backed separatists.

More than 8,000 people have died in the conflict and at least 1.4 million have been displaced, according to figures from the United Nations.

Russia has continued to deny any direct role in the conflict.

Elections will not take place in the Donbass region and displaced citizens who are still registered at their former addresses will also be unable to vote.

Voter turnout was expected to be high, but a pre-election poll showed 55 percent of Ukrainians were skeptical the local elections would create change, reported local newspaper the Kyiv Post.

New elections laws require runoffs if no mayoral candidate receives a majority of support in each city with a population of more than 90,000, and only 12 percent of survey respondents said they understand the updated rules that could bring another round of elections Nov. 15.

“They (the opposition) are playing the card that when they were in power things were much better than now,” said Maksym Yakovlyev, a professor of political science at the National University of Kiev-Mohyla Academy in Ukraine.

Yakovlyev said this strategy ignores the decisions made by former president Yanukovych that led to the Euromaidan revolution in 2014 that toppled him and led to current conditions.

The country’s economy has been battered since the revolution, with the conflict in the east destroying and closing many factories that accounted for around 20 percent of Ukraine’s GDP.

While Ukraine was able to secure a 20 percent write down on $18 billion worth of bonds in August, Russia has refused to accept the terms and wants to collect in full on a $3 billion bond note due in December.

Ukraine needs to lower its debts to meet conditions set by the International Monetary Fund to receive funds that are part of its $17.5 billion bailout.

Ukraine has vowed to fight Russia in court over the note.

Despite the war and faltering economy in the background, on the local level, Yakovlyev said Ukrainians were concerned about infrastructure and transportation options in cities as well as the fight against corruption.

With Ukraine undergoing decentralization, local officials are likely to gain more power and control over local budgets spurring competition in the upcoming elections with more than 140 political parties registered and reports of old dirty tactics including the handout of free food and candidates registering with similar names to confuse voters.

Infighting between oligarchs, including between Poroshenko and Kolomoyskyi, has increased calls for the affluent class that has long held political power in Ukraine, often using it for their own financial interests, to be replaced.

“De-oligarichization is ongoing. I hope for positive results but I don’t see it happening with local elections,” Yakovlyev said.

With only a third of Ukrainians already decided on who they will vote for, experts said it was hard to make accurate predictions ahead of local elections, highlighting a stark difference between Ukraine and its eastern neighbor Russia.

“In Russia by and large, you know who is going to win and you can guess the percentage spread. While in Ukraine it’s a weak, crummy, confusing democracy, but it is democratic and everyone is pulling, pushing and tugging and bending the rules,” Motyl said.

“In Russia one side bends the rules, while in Ukraine all sides bend the rules.”