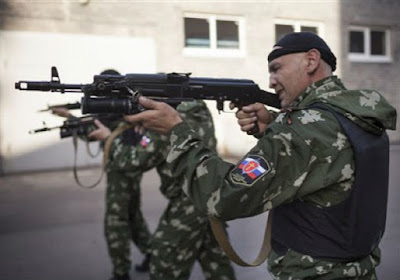 Members of the Russian Orthodox Army train in Donetsk, Ukraine.

Russia and its proxy forces have engaged in a systematic campaign in the last year to abuse religious minorities in Ukraine, according to a new report and accounts that have garnered scant attention in the Western press.

In its annual report on International Religious Freedom, released Wednesday, the Department of State said that conditions for religious minorities deteriorated in the parts of eastern Ukraine controlled by Russian-backed separatists, as well as in the Russian-occupied peninsula of Crimea.

Russia seized Crimea in March 2014, and Western nations have accused the Kremlin of backing the Ukrainian separatists in a conflict that has killed more than 8,000 people since last April.

“In the areas they control, the separatists have kidnapped, beaten, and threatened Protestants, Catholics, and members of the Ukrainian Orthodox Church of the Kiev Patriarchate, as well as participated in anti-Semitic acts,” the report said.

The separatists formed two “people’s republics” last April in Donetsk and Luhansk and declared in the constitution that the primary religion would be the “Christian Orthodox faith … practiced by the Russian Orthodox Church.”

All other religions, including separate Christian denominations, appear to have been targeted.

According to the report, “His captors reportedly subjected him to repeated mock executions and took away his medication, threatening him with a ‘slow death’ unless he joined the Russian Orthodox Church. He also sustained physical injuries before his release July 14.”

Donetsk authorities also detained Fr. Pawel Witek, a Roman Catholic priest, last May and accused him of being a sniper.

The separatists blindfolded him, tied his arms and hands, and guarded him in a basement before eventually releasing him.

Other churches that were targeted include God’s Church of Ukraine, Jehovah’s Witnesses, Seventh-day Adventists, and a variety of Protestant denominations.

In a statement last July, the heads of the Evangelical Protestant Churches of Ukraine said that militants had subjected their members to “abduction, beating, torture, murder threats, and damage to houses of worship, seizure of religious buildings, and damage to health and private property of the clergy.”

One pro-Russian group also placed anti-Semitic pamphlets near the Donetsk synagogue and threatened to force Jews to register with a local commissioner and pay a fee.

Russian forces prevented some priests from entering their churches, raided mosques, and sponsored a new Muslim organization to supplant the local leadership body for Tatars.

In one incident last June, unmarked Russian forces stormed into a Ukrainian Orthodox Church and “verbally abused the parish priest and beat his pregnant wife and daughter, who suffered from cerebral palsy.”

“The occupation authorities refused to investigate the incident,” the report said.

“The church was since closed.”

Authorities also denied residency permits to Turkish imams within the Tatar community and priests in the Greek Catholic Church.

President Vladimir Putin, who has formed a close alliance with the Russian Orthodox Church claiming to be a defender of traditional values, has denied sending troops and weapons to support the separatists in Ukraine.

However, reports indicate that, despite a recent lull in fighting between Ukrainian forces and the separatists, Moscow has continued to supply the latter with advanced weapons systems such as a multiple rocket launcher.

Advocates say that bolstering Ukraine could help convince Putin to withdraw his support for the separatists as Russian casualties mount.

Increased U.S. support could also offer a reprieve to religious minorities that have suffered under Russian occupation.

However, Obama has appeared unwilling to confront Putin’s military ambitions, whether in Ukraine or in Syria.

Russia has launched hundreds of airstrikes in recent days to prop up Syrian President Bashar al-Assad, a brutal leader whom Obama has called on to step down.

“The optics are that we’re backing off,” a former Obama official told Politico.

“It’s not like we can’t exert pressure on these guys, but we act like we’re totally impotent.”