October 03, 2015
CEDAR RAPIDS, USA -- GOP presidential candidate Marco Rubio is using a speech on Friday to blast Russian President Vladimir Putin as ' a gangster and a thug,' and vowing to take a hard line against 'Russian agression' if he is elected president. 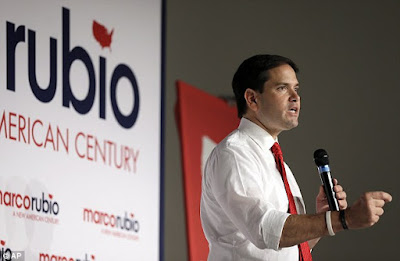 Rubio has surged in the polls after last month's GOP primary debate in California, although he still significantly trails front-runner Donald Trump.

In prepared remarks distributed before his speech, Rubio plans to tell a national security forum in Cedar Rapids, Iowa, that he will impose everything from personal sanctions on top Russian officials to 'lethal military assistance' to the country of Ukraine to counter Putin.

Rubio, fresh off a new surge in the polls that puts him in second place behind billionaire Donald Trump in the GOP race, was no less kinder to President Obama, whom he blamed for 'failing the test of leadership' against Putin and his 'aggression.'

'Under my administration, there will be no pleading for meetings with Vladimir Putin. He will be treated as the gangster and thug that he is. 'And yes, I stand by that phrasing,' Rubio told an audience at the Americans for Peace, Prosperity and Security (PPS) forum at the Cedar Rapids Public Library.

'I will immediately provide Ukraine with lethal military assistance and increased intelligence sharing to ensure that Putin’s violation of Ukraine’s sovereignty comes at a price.'

Rubio said he would start by imposing a new round of sanctions on top Kremlin leaders, such as banning their visas and freezing any U.S. assets they may have, and then attempting to isolate Russia such as by excluding it from the SWIFT Interbank payment system.

Rubio said without aggressive steps to counter Putin's own aggressiveness, the U.S. risks another Cold War.

While the continuing crisis in Ukraine is the most pressing problem between the U.S. and Russia, Rubio said this week's Russian airstrikes in Syria open up a new front in the political struggle.

The Syrian airstrikes are 'no less noteworthy as a power play' than Putin's aggression in Ukraine, Rubio said.

'[Putin] is using military power to prop up Bashar al-Assad, a vicious dictator who is intentionally slaughtering the Syrian people and helping prolong ISIL’s terror in an attempt to retain power,' Rubio said.

'And let’s be clear about something: No matter what Putin says, he is not involved in Syria out of an altruistic desire to defeat ISIL.

'Putin is involved for the purpose of keeping Assad, or someone like Assad, in power; keeping Syria as a client-state for Russia; and distracting from his actions in Ukraine.'

At the same time, Rubio said he would extend support to the Russian people themselves, although he was less clear on how he would do so.

'Our concerns with Russia are not with them – for it is they who suffer most from Putin’s lies, thievery and repression.

'Unlike this President, I will speak frankly about who Vladimir Putin is and what his regime represents.'

A YouGov/Economist poll released Thursday showed Rubio at 16 percent to Trump's 25 percent in the GOP race, with retired surgeon Ben Carson in third place with 15 percent.

A more broad, compilation of major, national polls by Real Clear Politics, however, puts the Florida senator in fourth place with 9.5 percent, compared to 11.8 percent for former Hewlett-Packard CEO Carly Fiorina, 16.3 percent for Carson and 23.3 percent for Trump.