October 13, 2015
AMSTERDAM, Netherlands -- With the Dutch Safety Board poised to release its report into last year’s loss of Malaysian Airlines Flight 17 over a war zone in eastern Ukraine Tuesday, Bloomberg examines the course of a probe that’s been bedeviled by political machinations from the start. 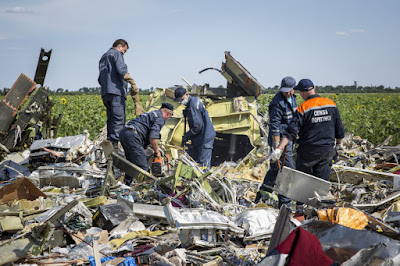 The Boeing Co. 777 crashed en route from Amsterdam to Kuala Lumpur on July 17, 2014, while entering territory held by Russian-backed rebels -- leading to speculation that it was mistakenly shot down by one of the two sides.

All 298 people on board were killed.

What do we know?

Following an initial examination of the wreckage, an interim report published in September 2014 suggested the 777 broke up in the air after being hit by “a large number of high-energy objects,” bolstering the theory that the wide-body jet was brought down by a missile.

What do the governments say?

The U.S., which had said from the start that separatists most likely downed MH17, interpreted the evidence as pointing to a surface-to-air-missile fired from a Buk launcher supplied by Russia.

Ukraine also says any missile must have been Russian; Moscow points out that Ukraine itself has an arsenal of Buks which it inherited with the break up of the Soviet Union.

Can we expect a definitive conclusion?

The report will describe the damage observed and suggest what most likely caused it, possibly indicating what weaponry might have been involved.

The triangulation of radar signatures could help pin down where any projectile was launched from -- something that might otherwise be impossible given that the Buk system is truck-based and highly maneuverable.

This may be the closest the report comes to pointing a finger; it’s likely to stop short of apportioning blame or making observations about motivations.

What do the experts anticipate?

Paul Hayes, who runs the Ascend Worldwide air-cash database, says the Dutch Safety Board may follow Britain’s handling of the loss of Pan Am Flight 103 over Lockerbie in 1988.

That report was very dry, said a bomb was placed in a luggage container, and stopped at that point, he said.

Why is the Netherlands leading the probe?

While it’s usual for authorities in the country where a crash takes place to lead the investigation, almost 200 of the MH17 victims were Dutch.

Just as importantly, a Ukraine-led probe would have been unacceptable to Russia given the ongoing conflict between the nations, with the Netherlands perceived as more neutral.

Even so, Russia has said some information it presented was ignored and that it should have been more closely involved.

How was the investigation conducted?

The probe was severely hindered by the ongoing conflict, which made access to the crash site impossible for extended periods.

The U.S. State Department cites reports suggesting evidence was tampered with and bodies and debris hauled away.

What lessons will regulators draw?

The 777 was taking a route over Ukraine that some carriers had been avoiding, but which wasn’t officially proscribed.

And at about 33,000 feet it was at an altitude thought to be immune from most ground attacks -- though not from the Buk, a radar-guided weapon that can lock on to a target at a range of 140 miles and reach altitudes as high as 72,000 feet.

The crash should lead to improved sharing of information to better establish which flight-paths should be universally avoided by civil aircraft.