For Ukraine, A Grand Bargain Is Still Elusive

October 18, 2015
KIEV, Ukraine -- Stratfor provides a status report on the Ukraine civil war, a festering boil in the heart of Europe and spark that hawks on both sides are using to restart the cold war. 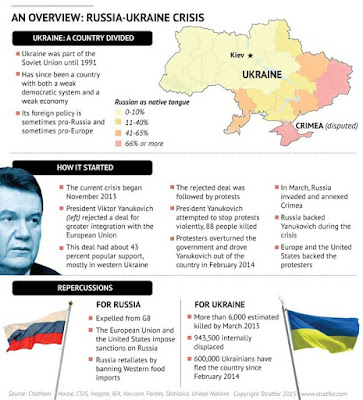 These conflicts usually end in diplomacy; that point seems far away.

Because of political considerations, Kiev will not fully submit to separatist and Russian demands for amnesty and “special status” powers in eastern Ukraine.

Europe will encourage the Ukrainian government to be accommodating, but the United States will push for a hard-line approach.

Russia will keep its options open and will not abandon the possibility of ramping up militant activity if Kiev and the West are uncooperative.

After a year of slow-burning conflict in eastern Ukraine, the relationship between Kiev and Moscow seems to finally be improving.

Fighting on the ground has dissipated, there have been positive developments in talks over the past few weeks and both sides began to pull heavy weaponry back from the line of contact in early October.

Moreover, Russia and Ukraine have agreed on a temporary natural gas deal and will begin direct negotiations on Kiev’s terms of repayment for a bond that matures in December.

And in a major concession to Kiev and its Western backers, the separatist territories of Donetsk and Luhansk announced Oct. 6 that they would postpone local elections.

These developments signal some progress toward ending the standoff between Russia and the West over Ukraine.

However, a broader settlement will still be difficult to achieve and is unlikely to be reached before the end of the year.

Tension between Russia and the West over Ukraine mounted during the first eight months of the year.

Both government troops and separatists regularly violated the cease-fire signed in February as part of the Minsk agreement.

And casualties steadily increased, reaching over 8,000 since the start of the fighting in April 2014.

In the meantime, Russia and NATO built up security and increased the tempo of military exercises along the Russia-Ukraine border.

The United States and European Union also intensified sanctions against Russia, while Moscow responded with its own economic restrictions on the West.

However, things began to change in September.

The month began with what was supposed to be a one-week cease-fire to coincide with the beginning of the school year.

Instead, the cessation of fighting has held for over five weeks with relatively few violations and one death.

This calm on the battlefield has lent momentum to the efforts to implement the Minsk protocols at a tactical level, seen most tangibly with the pullout of heavy weaponry from the line of contact by Ukrainian forces beginning Oct. 4.

This withdrawal, in turn, prompted the rebels to start removing their heavy weaponry, and on Oct. 6 representatives from Donetsk and Luhansk announced that they would postpone their local elections until 2016, a move made with the tacit approval of Moscow.

Negotiations between Russia and Ukraine have progressed on other issues as well.

On Sept. 26, the two reached a natural gas agreement, which as of Oct. 12 ended a cutoff in place since June.

The deal is temporary, meant to last through winter — similar to last year’s agreement.

Nonetheless, the final accord was the result of a compromise on the price by both sides.

There has also been movement on another contentious issue: the maturation of a $3 billion bond Ukraine was set to pay off to Russia by December.

Russian Finance Minister Anton Siluanov announced Oct. 5 that he plans to meet with his Ukrainian counterpart this week to discuss the bond repayment.

This will be the first time such formal talks have been held.

Up to this point, Kiev has insisted that it will not make the repayment unless it is restructured in a way similar to an August debt relief deal with Western bondholders.

Russia has so far refused the request, but direct talks on the issue may open the way for yet another compromise between Kiev and Moscow, though talks could also strengthen Moscow’s hand against Kiev in areas such as Ukraine’s negotiations with the International Monetary Fund.

The recent compromises and engagement have given rise to speculation that a grand bargain may be taking shape among Russia, Ukraine and the West.

Moscow is newly cooperative because of its dramatic economic contraction and because of the political and military limits of extending its push into eastern Ukraine.

Several EU countries are also interested in de-escalating the conflict, especially those whose economies have been hurt by European sanctions and by Russian counter sanctions.

Despite the gains made in the past month, a broader settlement likely will not be reached before the end of the year for several reasons.

First and foremost, the path outlined by the Minsk protocols is open to interpretation.

There is no clear definition of what the “special status” given to the separatist territories actually is.

The rebels say the status gives them long-term autonomy over issues such as defense and foreign policy, while Kiev insists the status is only temporary and applies only to areas such as budgetary policy and cultural affairs.

Upholding the cease-fire will pave the way for further negotiation, but coming to final terms will be far more difficult.

Second, the issue of amnesty for separatist fighters has not been settled.

Militants are calling for a blanket amnesty while the Ukrainian government insists amnesty should only be granted on an individual and selective basis.

Third, even if the Ukrainian government and the separatists are able to agree on a way forward, Kiev’s domestic situation will cause problems.

While Russia and the separatists increase the pressure to grant greater political concessions in eastern Ukraine, ultranationalist groups, particularly Right Sector and Svoboda, have pushed in the opposite direction.

These groups oppose any compromise with separatists and, as a violent September rally in Kiev against constitutional amendments showed, they are able to destabilize the political system.

This leaves Kiev in a difficult position — favorable moves toward either side could lead to blowback by the other.

Finally, the United States could pose another obstacle to resolution.

Certain European countries, including Germany and France, are interested in de-escalating the conflict, but the United States has maintained an aggressive posture toward Russia.

The United States has less to lose by maintaining sanctions against Russia and has less of an interest in easing them than does the European Union.

A grand bargain would need to include the United States, but Washington is uninterested in a deal that does not include a complete pullout of Russian troops from eastern Ukraine.

Russia has attempted to use issues such as its growing role in the Syrian conflict to bring the United States to the negotiating table, but so far it has been unsuccessful.

These obstacles do not preclude progress in negotiations between Russia, Ukraine and the West, and all of them are subject to change.

But though talks may well lead to more room for compromise over certain military, political and economic issues, a comprehensive settlement will be elusive for the near future.