As Russia Enters War In Syria, Conflict In Ukraine Begins To Wind Down

October 05, 2015
DONETSK, Ukraine -- The conflict in Ukraine sees less shelling each week, while hawks and rebel leaders are being told by Moscow to pipe down and toe the line. 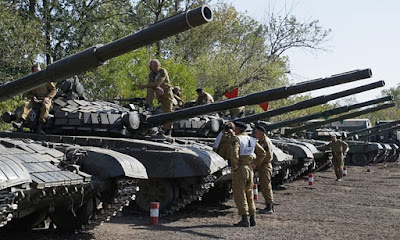 Pro-Russia fighters, with Russia-supplied tanks, near Torez, about 50 miles from of Donetsk.

At a highly fortified separatist position near the village of Peski outside Donetsk, the pro-Russia fighters have been getting used to an unusual sound in recent weeks: silence.

Shelling and exchanges of fire have become so rare at this frontline position in eastern Ukraine that commander Alexei Novikov and his men even had time recently to kill, grill and eat Poroshenko, the pet pig they named after Ukraine’s president (Merkel the sheep survives, for now).

“Both sides are moving towards partisan warfare, with small diversionary missions behind enemy lines,” said Novikov.

“It has become boring here.”

As Russia ratchets up military action in Syria, the fighting in east Ukraine is winding down.

The leaders of Russia, Ukraine, France and Germany will meet in Paris on Friday for talks on Ukraine, and while a lasting political solution still seems some way off, there is confidence on all sides that the military action could finally be over, a year after the first ill-fated, and largely ignored, ceasefire agreement was signed in Minsk, Belarus.

With all sides tired of military conflict, the most likely outcome appears to be Moscow pushing the territories back to Ukraine legally, with an ensuing period of uncertain peace as both Moscow and Kiev decide how far they are ready to compromise on their goals.

“The Russian side is trying to push the Minsk agreements as far as Ukraine is willing to go,” said Vitaly Leybin, editor in chief of Russian Reporter magazine in Moscow.

He said this will probably involve a Trans-Dniester-style solution, where the regions remain de jure part of Ukraine but de facto function as independent statelets backed up by Russia.

However, he said if Ukraine agreed to a full range of concessions, the Russian side would be willing to return control of the Russia-Ukraine border to Kiev.

“If Ukraine gives the regions special status, a full amnesty, recognises the rebel forces as a ‘people’s militia’ and gives the regions the right to its own cultural policy and special economic relations with Russian regions, then we would give the Ukrainians back control of the border.”

These conditions will not be acceptable to Kiev, but there too officials have noticed a change of tone from the Russians.

“They are trying to push the territories back into Ukraine, and shift the focus from military aggression to political destabilisation inside Ukraine,” said Dmytro Kuleba of the Ukrainian foreign ministry.

“If our goal is reintegration and reconciliation we will have to look at all options,” he said, when asked whether Ukraine was ready for a real political settlement that included rebel leaders.

Russia has propped up the separatist statelets financially and militarily, and many of the commanders have been trained at bases in Russia, as the forces gradually become more professional.

Despite repeated denials, it is also clear that Russian regular forces were introduced at key intervals when the rebels faced defeat last year, and again in February this year to back up a rebel offensive.

Moscow has made it clear to Kiev that this option is always on the table should the Ukrainians attempt to win the territories back militarily.

“Russia is behind us and there is the unambiguous hint that if you continue military aggression against us, then Russia will not refrain from supporting us in absolutely every way it can, and they understand that,” said Alexander Khodakovsky, a top rebel leader, in a recent interview in Donetsk.

Meanwhile, those who disagree with the uneasy peace on all sides are being sidelined.

Andrei Purgin, one of the original ideologues of the Donetsk People’s Republic, who represented the territory at the Minsk negotiations, was sacked from his position in the leadership last month and spent four days under arrest.

In an interview in Donetsk, Purgin evaded a direct answer as to the reason behind his arrest, but said he disagreed with the ceasefire.

Purgin said he believed a criminal case could be launched against him, and his movements were being tracked by the separatist authorities he led until recently.

In Moscow, too, there are rumblings that the “Novorossia project” to carve out a pro-Russian statelet in east Ukraine has been well and truly closed down.

Egor Prosvirnin, editor of the nationalist blog Sputnik and Pogrom, has been called in for questioning in recent weeks over suspicions that his website may contain “extremist material”.

The article in question, while advocating for Russia to take full control of eastern Ukraine, does not contain anything that could not have been heard regularly on Russian state television over the past year and a half, and Prosvirnin believes Russian authorities are now trying to stuff the genie back into the bottle.

“The conflict is being frozen and we are too strongly in support of the Novorossia project, we’re too independent. This is a warning to us to stop what we’re doing,” he said.

Khodakovsky said while there are more hawkish elements inside the Kremlin who want to take a firmer line, for the time being they have been sidelined.

“Part of the Russian elite doesn’t want to argue with the west and is ready for very serious compromises, another part of the elite is more tough and ready for real confrontation. The middle position seems to me to be that we should get out of the situation with as few political and economic losses as possible,” said the rebel leader.

“There is no ideal solution. All the options are fragile, and whichever is taken, none of them are not ideal by definition and will involve serious compromises from all sides. And this makes more radical people on all sides unhappy.”

For most of the residents of east Ukraine, and the roughly 1.5 million refugees and internally displaced people who have fled their homes, the end of fighting will come as a huge relief.

For more than a year, locals have had to live with a war in which the main mode of military engagement has been both sides firing artillery at each other over the heads of civilians.

In the village of Spartak, not far from Donetsk train station, there was still sporadic Ukrainian shelling as recently as last week, despite the fact that rebels said they were obeying a strict order since 1 September not to fire back under any circumstances.

“My knees hurt too much to go into the basement, now I just lie on the floor in the bathroom when the bangs start,” said 80-year-old Ekaterina, who lost her daughter to shelling last year, in tears outside her apartment block in Spartak.

At the nearby separatist position, the 22-year old commander who gave his name only as White, said the Ukrainian army had stopped attacking, but that volunteer battalions based near the frontline would send mortars over “out of boredom” every few days.

He claimed his men had nothing to fire back with and were respecting the order not to fire, but he was sceptical of a lasting ceasefire.

“Half of my men are from towns under Ukrainian control. What are they supposed to do? There can’t be any real talk of peace until we have pushed the Ukrainians back. But at least people are not dying any more.”

But while few people in Donetsk, Kiev or the west think the underlying issues are even close to being solved, the fatigue with military action on all sides means there is a growing consensus that the “hot” phase of the conflict has drawn to a close for now.

“This is the end of a stage,” said Khodakovsky.

“We will be de jure inside Ukraine but will live by our own laws and leaders. Depending on how the political situation inside Ukraine and Russia develops, the next stage will be either increased stability leading to some kind of lasting settlement, or renewed conflict.”