September 24, 2015
KIEV, Ukraine -- Ukraine pressed NATO on Tuesday for Western weaponry to help defend itself against pro-Russian separatists but the head of the alliance resisted for fear of threatening a fragile ceasefire with Russian-backed rebels. 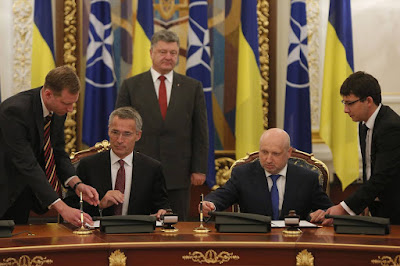 Oleksandr Turchynov, Secretary of the National Security and Defense Council of Ukraine, second from right, and NATO Secretary-General Jens Stoltenberg, second from left, take part in a signing ceremony of bilateral documents in Kiev, Ukraine, on Tuesday.

"Our heroes, our warriors belong to an army that was neglected for decades...they face aggression and need defensive weaponry," the speaker of the parliament, Volodymyr Groysman, told Stoltenberg making his first visit to Ukraine as head of NATO, 18 months after Russia seized Ukraine's Crimean peninsula.

Prime Minister Arseny Yatseniuk, sitting alongside Stoltenberg at a national security council meeting, was equally blunt in depicting a threat from Russia which, however, denies it has provided weapons to the rebels in the east.

"Defence capabilities are essential to us in the face of a nuclear country, which has spent tens of billions of dollars on modernising its army," Yatseniuk said.

Diplomats said the issue of weaponry was raised at the security council, but the tone was less strident than in public.

Initially, defensive equipment, for the Ukrainians, could include more communication equipment, they said.

But Stoltenberg said that was as far as NATO would go, telling Reuters in an interview that "NATO does not provide or supply weapons."

"The main focus now is the implementation of the Minsk agreement," Stoltenberg said, adding that Monday was the first day since the peace deal was signed in February in which no violations of the ceasefire had been registered.

The ebb in violence in Ukraine's east, where the West say Russia is supporting and arming separatists and has positioned its own heavy weapons, was an opportunity for new momentum for diplomacy, Stoltenberg said.

Ukrainian President Petro Poroshenko, while accepting that non-NATO Ukraine could not expect direct military aid, portrayed his country as a bulwark against Russian aggression that could one day threaten other parts of the continent.

"De jure we are not allies, but de facto we are much more than partners. Ukraine is the most eastern outpost of the Euro-Atlantic area," Poroshenko said.

Stoltenberg sees Ukraine as the most complex of Europe's many crises and backs the 11-step Minsk peace deal signed in February that set an end-year deadline for implementation.

He sees the alliance's role mainly limited to helping rebuild the Ukrainian army after years of mismanagement that was reflected in defeats by the pro-Russian rebels.

When he moved last year to decline an EU partnership deal and draw closer to Moscow, he was toppled by protests dubbed by Russia a Western-backed coup.

The current pro-Western leadership under Poroshenko now sees NATO membership as the only way to protect its territory.

Russia opposes any potential expansion of NATO to former communist areas of eastern and southeastern Europe, part of a battle for influence that lies at the heart of the conflict in Ukraine.