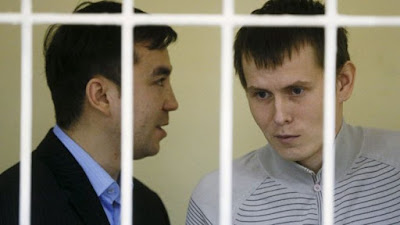 The two men, named by Ukrainian officials as Alexander Alexandrov (R) and Yevgeny Yerofeyev, appeared in a cage on Tuesday.

The pair, named as Yevgeny Yerofeyev and Alexander Alexandrov and alleged to be officers in Russia's GRU foreign military intelligence, were captured in May during fighting in east Ukraine.

Russia insists the men were not serving soldiers when they were detained.

The hearing was adjourned.

The Ukrainian security service says the two men have admitted being members of the Russian military and helping pro-Russian separatists in eastern Ukraine.

But Yevgeny Yerofeyev denied some of his earlier statements, saying that they had been given under duress.

Alexander Alexandrov has not changed his testimony.

Moscow, which has long claimed there are no Russian servicemen in Ukraine, says the men had retired from the military intelligence service before going to Luhansk to join the separatists.

Some officials have spoken of the possibility of exchanging them for Ukrainian air force pilot Nadia Savchenko, 34, who was captured last year.

Tuesday's hearing coincided with the resumption of Nadia Savchenko's trial in southern Russia, where she is accused of planning the deaths of two Russian journalists in a mortar attack.

She told the court she was captured by rebels in eastern Ukraine before the journalists were killed, and then handed over a week later to Russian forces.

"I am a prisoner of war and a hostage who has been abducted," she said, rejecting Russia's claim that she crossed the border herself, posing as a refugee.

"I was taken across the border against my will."

Ms Savchenko, who has become a Ukrainian MP during her detention in Russia, dismissed the case against her as a "piece of rubbish" when the trial began last week.

The court trying the two Russians in Kiev said the judicial system would look at a request by their defence lawyers for the trial to take place in Luhansk region, where the soldiers were captured.

Their detention last May was a major success for Ukrainian forces, which had long maintained that Russian special forces were playing a key role in the military campaign by pro-Russian rebels.

One Ukrainian was killed during the fighting in which they were captured.

Ukraine's security chief told the BBC at the time that they had been part of a 220-strong GRU team deployed in Luhansk.

While Ukraine and the West have said there is clear evidence of Russian military help, the government in Moscow has argued that only volunteers have joined the separatists in the east.

One of the captured men was shown on an unverified video in May saying he was from the central Russian city of Togliatti, where an elite army intelligence unit is based.