Squalor And Danger On Frontline Of Divided Ukraine

September 21, 2015
PISKY, Ukraine -- “FOR our friends that are now gone,” Konstantin Bernovitch says solemnly, raising a glass of Samehon, a strong homemade Ukrainian liquor, in front of him. 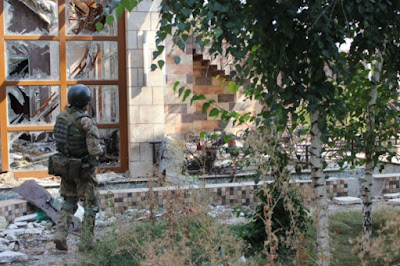 In the dimly lit room, a dozen other soldiers follow the 23-year-old in unison, faces stuck in a moment of reflection.

The sombre silence is only penetrated by the distant sound of shelling and quick staccato artillery fire – noises that have become the norm in this corner of Eastern Ukraine.

After the toast soldiers descend to the basement of the half-destroyed villa, now turned military barracks.

“It’s full of mice and rats,” Bernovitch says, with a shrug and a smile, “but it’s safer down there.”

However, despite a renewed attempt at a ceasefire, signed on 1 September, fighting in the area although slowed significantly, has not completely stopped.

The settlement has been touted locally as a village that never sleeps, an area that has come under constant fire – even during past ceasefires – as the Ukrainian army attempts to hold on to the territory from Russian-backed separatists that control the nearby airport and Donetsk city.

“Our positions were attacked last night for the first time after the signing of the new ceasefire,” Voldymyr Kuzyk told Scotland on Sunday from his position in a half-built and now partially ruined church on the outskirts of Pisky.

“I don’t think there will be the order for us to advance,” he continues, frustration clear in his voice.

“We’re just meant to sit here, even if they fire at us,” a soldier sitting nearby shouts out.

Orders from the Ukrainian government have been to fortify positions and hold on to current territory, not attack and reclaim what has been lost.

Digging trenches deeper and making yourself a harder target, rather than firing back, appears to be the main tactic.

For Kuzyk who has risked his life in this war, there is a bitterness to his words.

“There have been rumours that the Kiev government will give up the Donbass,” he says, “and we can do nothing about it.”

Looking out at dawn as the sun rises over the sunflower fields and forests that flank Donetsk city, it’s hard to begrudge Kuzyk his feelings.

While clashes have slowed down, sporadic shelling continues to blight Pisky and the surrounding area, while mines and other unexploded ordnances dangerously dot the scrubland.

Separatist snipers are in range of many of the Ukrainian positions, with some areas completely exposed.

“Stop here,” Bernovitch, says quickly as an intersection approaches while on a morning patrol.

“One by one we walk and then at this point,” he says pointing around twenty metres in front, “you run,” he continues.

“Snipers look all over this place.”

The place Bernovitch is talking about is the Crossroad of Death.

An intersection nicknamed by Ukrainian soldiers because of its deadly position located in perfect eyeline of high-rise tower blocks a mile away that constantly house separatist snipers.

The crossroads link two strategic military positions, and so crossing it cannot be avoided.

Bernovitch runs across, reaching an area with tree cover before motioning for the next runner.

Life in East Ukraine’s Donbass region has its daily perils even during times of attempted ceasefire.

At Point 18 on the other side, a military barracks surrounded by an array of deep trenches housing artillery – some of which dates from the Second World War – chain-smoking soldiers walk with purpose through the subterranean dirt-walled maze.

Spent bullet casings litter the dirt, creating a metal and mud tapestry that covers the ground.

In a small green bungalow at Point 18 that hugs the crossroads, two soldiers sit sorting out military equipment for the day – surprisingly neither of them is Ukrainian.

One a volunteer fighter from Georgia, the other who identifies himself only as Mongol, sit smoking and laughing as they recall that two decades ago they were fighting each other in the Chechen war.

Mongol, a sniper, who was born in St  Petersburg and previously served in the Russian army, speaks little except to say his family originate from Ukraine, his apparent reason for participating in the war.

The Georgian speaks more freely, “All the wars Russia begin are the same,” he says with an air of frustration, one that comes from a life strung with years of opposing Russian aggression.

“I think people who fight here for Ukraine won’t let the Ukrainian government just give up the Donbass. The regular army can be called back if the government orders it, but we volunteer fighters won’t give it up so easily.”

His words allude to the quagmire that the war here in the east has become.

Both sides have an array of volunteer units and soldiers, some going under the radar of politicians, all hard for any government body to control.

Decisions made hundreds of miles away in capital cities have little significance for men who feel they’re fighting a personal cause.

There is a strong sense of camaraderie among the soldiers of 93rd Brigade, a natural occurrence of living in cramped conditions and fighting side by side for months.

Pisky itself has seen some of the worst clashes during the war that now in its second year has claimed more than 8,000 lives.

Jokes and pranks keep spirits up, but when an alarm goes off one evening about a potential separatist attack nearby, men spring into action, running to waiting tanks with a sense of war-alertness that has been impressively drilled into soldiers that two years ago were school teachers, students, and miners.

A false alarm, just a drill, Bernovitch says, half an hour later.

“This shitty war,” he mutters in broken English as though whether a drill or not, it doesn’t matter.

The conflict continues, played out in rat-infested basements and deep muddied trenches, without much hope of a nearby resolution.