September 23, 2015
DONETSK, Russia -- Ukrainian military pilot Nadia Savchenko has made a show of defiance, denying charges against her at the opening of her controversial trial in Russia. 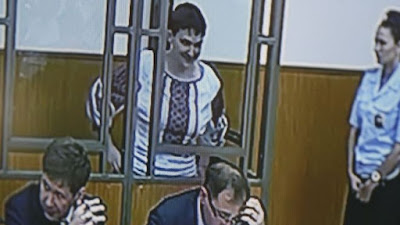 Journalists were only able to see a grainy monitor image of Ms Savchenko at her court appearance.

She described the case, in which she is accused of involvement in the deaths of two Russian journalists, as a "piece of rubbish".

Ms Savchenko could face 25 years in jail if found guilty.

The pilot has become a symbol of Ukrainian resistance to Russia.

The case has soured already strained relations between Moscow and Kiev.

In the courtroom in Donetsk, in Russia's southern Rostov region, Ms Savchenko proclaimed her innocence.

"Everyone in this room understands very well this is not a case, it's a piece of rubbish," she protested in Ukrainian from inside a glass cage in the courtroom.

"Russia has long behaved in a hypocritical and two-faced way," she added.

"Its hypocrisy is represented by the seizing of Crimea and intervention in eastern Ukraine."

Ms Savchenko is a national hero in Ukraine, where she is seen as a figurehead of the country's resistance in the conflict with pro-Russian rebels in the east of the country, seen by many as a war of Russian aggression.

The two journalists were killed in a mortar attack last June, which prosecutors allege she helped target.

Her lawyers have said that she has an alibi, and had already been captured by rebels at the time the attack happened.

However, they say a guilty verdict is a foregone conclusion as the court follows political orders.

"Nadia Savchenko has prepared herself for any sentence," one of her lawyers, Mark Feigin, told journalists.

"If there is even one chance to get her acquitted through the publicity round her, then we will use it."

Charges against her were upgraded in July to "joint perpetrator".

There was heavy security at the court, with armed riot police on guard outside the premises and snipers positioned on the roof of a nearby apartment block.

Journalists have been barred from the courtroom.

The defence argues the trial is being held in Donetsk because it will get less public attention.

Donetsk is a small town close to the border with Ukraine, not to be confused with the much larger rebel-held city of Donetsk in eastern Ukraine.

Ms Savchenko insists that she was kidnapped and smuggled illegally across the border into Russia at the time of her capture while fighting pro-Russian fighters in June 2014.

Most of the public seats in the court were occupied by Cossack militiamen, correspondents say, with the press only allowed to monitor proceedings by a video-link from an adjoining room.

However three representatives from the European Union, a Ukrainian consul based in Rostov-on-Don and Ms Savchenko's sister Vera were among those who were allowed to attend the hearing.

Ms Savchenko has spent more than a year in custody in Russia during which time she has gone on hunger strike for 80 days in protest over her detention.

Last year she was elected in absentia to Ukraine's parliament.