September 29, 2015
YAVORIV, Ukraine -- Marine leaders are considering expanding the Corps' mission in Ukraine by training local troops who could be tasked with taking on Russian-backed separatists. 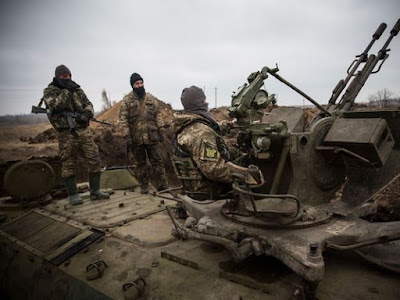 Ukrainian soldiers stand on top of an armored personal carrier near the front line of defense against pro-Russian separatists. U.S. troops, including Marines, will likely begin training more Ukrainian forces.

The move would follow a July 25 announcement by the State Department that the U.S. military would expand its mission in the country to include training conventional forces.

It also follows an 11-day exercise the Marine Corps concluded in Ukraine in late July.

About 1,800 military personnel from the U.S. and several European partners participated in Saber Guardian.

The exercise was held at the International Peacekeeping and Security Center outside Yavoriv in western Ukraine, near Poland — far from front-line fighting in Crimea.

State Department officials said if more U.S. troops head to Ukraine to train members of its military, they also will be far from the front lines.

"As with the training that’s just concluding with the national guard, it’s going to be in western Ukraine, near Poland, near the Poland border," State Department deputy spokesman Mark Toner told reporters July 24.

Marine officials said the training during Saber Guardian was focused on nonlethal tactics rather than direct combat skills, but a Washington think tanker says it could still help them fight Russian-backed separatists.

“The U.S. always says this as a way to not raise tensions with Russia," Luke Coffey, a former Army captain who’s now a fellow at the Heritage Foundation in Washington, said.

“All this sounds nice and plays well, but the reality is the training can be applied to Russian separatists in Ukraine, even if it is not directly focused on those issues.”

While details are scant about what training Marines might offer Ukrainian naval infantrymen, even nonlethal training will prove useful on the chaotic front near the Crimean peninsula, where fighters are mixed with civilian populations.

The need for nonlethal tactics and equipment on complex battlefields is a point Marine leaders emphasized during a Sept. 22 panel discussion during the Modern Day Marine expo in Quantico, Virginia.

Lt. Gen. Ronald Bailey, deputy commandant for Plans, Policies and Operations, used a photo from Ukraine, depicting what appear to be uniformed Russian troops standing in formation with men in jeans and sneakers, toting AK-47s, to illustrate the types of hybrid threats that are becoming increasingly common.

Marines are likely to find themselves in that sort of fight in the future where on a single urban battlefield they face a fusion of tactics and weaponry from insurgents and conventional military forces.

Ukrainian forces already operate in that environment, Coffey said, and Marines' counterinsurgency knowledge could prove useful to those troops.

“The location, culture and language are different than in Afghanistan or western Iraq, but nevertheless it is an insurgency, so Marines have a lot to offer,” he said.

"The Marines have a decade of COIN experience from Anbar and Helmand," he said, referring to provinces in Iraq and Afghanistan, respectively.