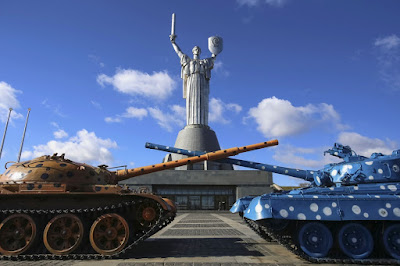 The sword-wielding statue of "The Motherland" is seen in the National Museum of the History of the Great Patriotic War in Kiev in 2014, a reminder of the common cause Ukrainians and Russians died for in World War II.

That date is broadly celebrated, but it is not the day Ukraine became independent.

The true date, Dec. 1, says much more about Ukraine and its aspirations, especially after its nearly 24-year struggle to build a democratic culture.

On Aug. 24, 1991, Ukraine’s parliament passed a declaration of independence with a condition: It had to be approved by the people of Ukraine in a national referendum, set for Dec. 1.

The widespread belief at the time in the West was that Ukraine was divided between east and west (a misconception that continues), and approval was in doubt.

However, on Dec. 1, with an extraordinary majority of citizens voting, the people of Ukraine approved independence by more than 92 percent — with huge margins of approval in every oblast.

It is too bad that the day of extraordinary public expression of Ukraine’s civil society is not the day recognized and celebrated.