August 16, 2015
KIEV, Ukraine -- On the threat list for Ukraine, Moscow is No. 1 with a bullet. The February cease-fire between Ukraine and Russian-backed rebels in the eastern part of the country is crumbling. 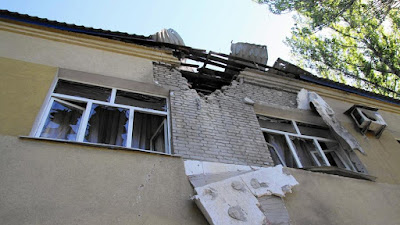 A building in Donetsk, Ukraine, shown Aug. 2, 2015, was damaged in the Russia-Ukraine conflict.

Intense clashes in recent days could mark the start of a Russian-backed summer offensive by rebels seeking to consolidate and extend their hold on Eastern Ukraine.

Russia continues to prop up the rebels in Eastern Ukraine with arms and aid; the ruble is the preponderant currency in rebel-held areas and Putin has never shown an inclination to back down even as EU and U.S. economic sanctions continue to bite.

Meanwhile, the U.S. is sending tanks, heavy artillery and other military aid across Eastern Europe to shore up security and deter another Russian land grab in Ukraine.

NATO is mounting a Europe-based rapid-reaction force designed to respond to military crises within days.

The Pentagon also is moving to supply Ukraine with bigger, longer-range radar to counter artillery deployed by the rebels.

All good, but Ukraine still needs weaponry, not just non-lethal assistance, from the West.

Listen to them, Mr. President.

The U.S. and its allies are pushing Ukraine President Petro Poroshenko and the Ukrainian parliament to push through key political changes under the terms of the February truce.

Kiev has reluctantly begun to adopt constitutional changes and authorize elections that would effectively legitimize the Russian-backed rebels.

Those changes would grant the rebel-held areas significant autonomy.

But Ukrainian leaders fear that such measures won't satisfy Putin for long.

Putin annexed Crimea as part of his larger plan to resurrect Soviet-style influence and draw Kiev closer to Moscow's orbit.

Russian forces and proxies in the east continue attacks and shelling.

They're still fighting the war, truce or not.

"I don't think that Putin is done in eastern Ukraine," he said.

Poroshenko is clear-eyed about the stakes:

"If we do not stop the aggressor, that means global security doesn't exist. Any time, any plane or submarine can make a missile attack, including against the U.S.," he told The Wall Street Journal.

"We aren't demanding that British, American or French soldiers come here and fight for us. We're doing this ourselves, paying the most difficult price — the lives of my soldiers. We need just solidarity."

But sending more arms to Ukraine can make Russian-backed forces pay a higher price if they continue to attack Ukrainian soldiers and civilians.

The U.S. and EU also have plenty of room to ratchet up economic sanctions against a weakened Russian economy.

In June, Putin railed about the extension of tough EU economic sanctions against Russia for its military interference in Ukraine.

But he hasn't yielded.

"If you want to talk about a nation that could pose an existential threat to the United States, I'd have to point to Russia," he told the Senate Armed Services Committee.

"And if you look at their behavior, it's nothing short of alarming."

Strong words from a Pentagon chief who also assesses global threats from Islamic State, Iran, al-Qaida, and terror cells around the world.

But on the threat list for Ukraine and the wider Baltics, Moscow is No. 1 with a bullet.