August 20, 2015
KIEV, Ukraine -- Renewed fighting in Ukraine has claimed the lives of dozens of civilians and soldiers in the past two weeks alone. 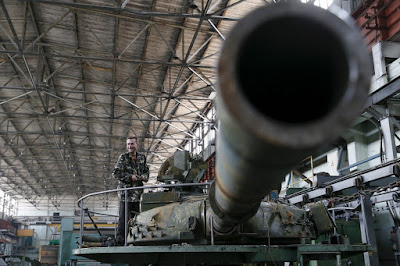 An employee works on a turret as armored vehicles are repaired at the Kiev armored plant, Ukraine, Aug. 14, 2015.

Ukrainian President Petro Poroshenko and Russian President Vladimir Putin have both called emergency war councils since Aug. 4, as the ceasefire and diplomacy have further broken down.

In its recent reports, the Ukrainian military has used the phrase “most shelling in six months” multiple times, and with increasing frequency.

On Aug. 10, Russian-backed fighters, whom Ukraine claims were led by Russian military units, launched a tank and artillery assault on the strategic town of Starohnatovka, which lies between the capital of the Russian-backed separatists, Donetsk, and the key port city of Mariupol.

The battle did not go the way the Russian-backed forces anticipated, however.

The Ukrainian military units stationed in the area, which apparently included volunteer units, beat back the offensive within hours, and even counterattacked before returning to their positions.

Though some facts are disputed, a few things are clear:

The battle marked a significant escalation in fighting, both sides suffered higher casualties than they have in months and the bloodshed in eastern Ukraine has not ended.

On Aug. 3, the day before the Ukrainian president chaired an emergency war council, the Ukrainian military released a map that showed where the fighting was occurring across the front lines and expressed great concern that both civilian and military targets were under regular attack across the entire front line.

The focus of the newest wave of attacks launched by the Russian-backed fighters is on the western front, from Horlovka in the north to Mariupol in the south.

Nearly every night for more than a week, citizens of Donetsk posted video of outgoing Grad multiple-launch rocket fire.

“Grad” is the Russian word for “hail,” and it could not be more appropriate, as these dumb-fire rockets fall indiscriminately on civilian and military targets alike.

The Ukrainian military has been firing back, and civilians have reportedly been harmed and killed on both sides of the demarcation line.

But Ukrainian soldiers complain that the military response to the attacks is neither proportionate nor effective because they do not have the necessary equipment to respond properly.

In particular, the Ukrainian government has lobbied the United States for sophisticated ground-scan radar, which would allow the military to monitor and target vehicles and artillery beyond its line of sight.

According to the Wall Street Journal, the Pentagon is ready to supply Ukraine with these weapons, but the White House is holding up the process – presumably to avoid angering the Russian government, which is supposed to be cooperating on other areas of geostrategic importance, like Iran and Syria.

The Russian government has already supplied its proxies with similar weapons.

In November, long after the Putin-negotiated Minsk ceasefire was supposed to take hold, both the 1RL232 “Leopard” and the 1RL239 “Lynx” ground-scan radar systems were photographed by journalist Stefan Huijboom and others traveling through Donetsk.

The only plausible explanation for these weapons appearing in Ukraine is that they were supplied by the Russian military, which likely operates them since they are highly sophisticated war machines.

Furthermore, Ukraine does not possess sophisticated surveillance drones, yet it has shot down (and the Organization for Security and Cooperation in Europe has witnessed) many Russian military drones operating on the wrong side of the border since the start of the conflict.

If that is not bad enough, the organization’s monitors in Ukraine have recently seen an R-330ZH “Zhitel” jamming system not far from the front lines.

The system is capable of jamming GPS navigation and communication; it was used by the Russian military during its takeover of Crimea last year.

Several OSCE drones have been jammed in the past months, and in one incident the aircraft crashed after the signal between the unmanned aerial vehicle and its controller was disrupted.

The separatists actually told the OSCE that they have access to sophisticated equipment that can jam unmanned vehicles; in late June, soldiers from the Vostok Battalion, a group long thought to be Russian Special Forces, took selfies with an R-330ZH.

Not only is Russia deeply involved in front-line operations in eastern Ukraine; it is hardly making any effort to hide it.

So, the Russian-backed fighters are firing hundreds of shells and rockets toward Ukraine each day, many of which are launched from civilian areas, and Ukraine is unable to respond adequately.

It is possible that Eastern Europe is closest to open war than it has been since the “Russian invasion” of Ukraine one year ago nearly to the day.

If this seems like a headline that repeats itself every few months, that’s not an accident.

The Russian military has steadily increased its direct intervention in eastern Ukraine since the Minsk protocols, signed in September and again in February, were supposed to freeze the conflict.

As long as the fighting never reaches a dramatic threshold, Putin has been able to keep the conflict out of the headlines, and away from the attention of voters in Europe and the United States, who might otherwise pressure their governments to do something to stop it.