Ukraine Crisis: Putin Shows Who Is Boss In Crimea

August 20, 2015
SEVASTOPOL, Crimea -- It was a typical display by Russia's action-man President, Vladimir Putin, clambering into a mini submarine and plunging to the depths of the Black Sea. 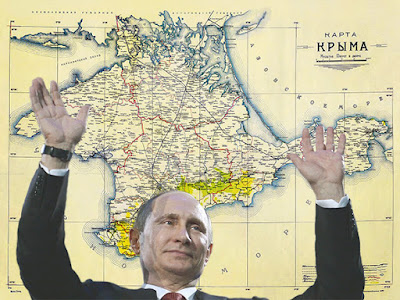 Putin with map of Crimea in the background.

The waves first washed over his glass bubble, then swallowed it, with underwater cameras capturing the slow slide down.

Officially, the dive was designed to view an ancient shipwreck on the seabed.

But it was also about demonstrating who is boss here now.

Vladimir Putin is spending three days in Crimea with a whole delegation of senior Russian politicians and business figures in tow.

Kiev has condemned the visit as an attempt to whip up tensions, and underlined that Crimea's only possible future was back with Ukraine.

So when Vladimir Putin docked for a moment in Sevastopol, I put that point to him.

"The future of Crimea was determined by the people who live on this land," the president replied on the quayside, stony-faced and unequivocal.

"They voted to be united with Russia. That's it. Full stop."

The results of a hastily-called sham vote on joining Russia did show overwhelming support in Crimea for annexation.

But the March 2014 referendum that Moscow hailed as the people's choice, was held with armed men on the streets and in clear violation of Ukraine's constitution.

As a result, the US and Europe imposed economic sanctions on Russia, and Crimea's annexation is formally recognised by next to no-one.

Still, there is no doubt that the majority here are strongly sympathetic to Moscow.

And, for Russians, "returning" the region from Ukraine, after its "loss" in Soviet times, was a very popular cause.

So Moscow has begun pouring in funds to back up its political claim on the peninsula, and to show it cares.

The children splashing in the sea and doing press-up contests at the Artek children's camp are already benefiting from that.

The sprawling complex cut into the hills was the biggest and most prestigious pioneer camp in Soviet times: a dream destination for the young.

Many Russian ex-Artekovites welcomed its "homecoming" with nostalgia.

The main canteen, sports halls and swimming pool have already been renovated and millions more roubles have been allocated.

But Russia is confident its money will not be lost.

"For those who invest here, [Crimea's status] has been decided," says director Alexei Kasprzhak.

As the linchpin of the local economy, the tourist sector is also due a cash injection.

Now they have largely stopped travelling here, Russia has been busy promoting the peninsula as the "patriotic choice" for a holiday.

"We decided to come as soon as Crimea was ours again," Olga explains, adding that she and her son usually holiday in Bulgaria.

"But we wanted to be among the first here," she says, though like many she has been shocked by the high prices and admits they are unlikely to come back.

For locals too, the price hike under Russian rule has taken some adjustment, although salaries have also grown.

But they say many of the other practical problems of living under sanctions are being addressed now.

"People had to make the transition, and it was total chaos," hostel owner Natalia Kyrychenko recalls, describing the difficulties of life in a territory that most of the world does not recognise.

"Gradually, normal service is being resumed."

Most of her savings have finally been returned from a former Ukrainian bank; she has a new, Russian phone number and - with MasterCard working here once again - she can get back to online shopping.

"I am sure Crimea will be recognised and this situation won't go on for long," Natalia says, hopefully.

But other businesses have been hit much harder by the new reality.

With that key market off-limits, production in his former tractor-repair shop has all but stopped.

He calls the annexation a "catastrophe".

"We were pulled out of Ukraine, but we didn't really join Russia," Dmitry says.

"We've just been left dangling. When it happened, they said don't worry, the Russian market will open for you. But just sticking on a 'made in Crimea' label gives you no preferences."

So Dmitry and his wife have made the hardest choice of their life, to leave.

An ethnic Russian, he plans to move his business to Ukraine, but that is not the only thing he is worried about.

"I don't even want to imagine how things will end here. But I don't want to be part of it. The fuse has been lit. We just don't know how long it will be before the situation explodes," the businessman warns.

For all Vladimir Putin's efforts to draw a line under the Crimea question then, it remains far from resolved.

His actions here have stirred up a storm that is not abating.