To Defeat Russia, Ukraine Creates Muslim Military Unit Made Up Of Crimean Tatars

August 04, 2015
KIEV, Ukraine -- Ukraine will create a unit of Muslim soldiers to protect the Crimean border and monitor imports and exports amid an increasingly violent battle with pro-Russian rebels, a Ukraine leader said Monday. 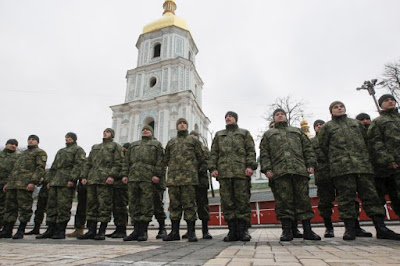 Members of the newly created Ukrainian interior ministry battalion "Saint Maria" attend a ceremony before heading to a military training, in front of St. Sophia Cathedral, in Kiev, Ukraine, February 3, 2015.

The Muslim battalion is part of growing relations between Crimean Tatars and Ukrainians and will report to the Ukrainian Defense Ministry, said Kırımoğlu.

Crimean Tatars are an ethnically Turkic and religiously Sunni Islam minority group that has faced decades of religious and political persecution under Russian rule.

"Unfortunately, throughout history, the right of the Crimean Tatar people to live in dignity in their own homeland was undermined with collective deportations and repression. Today we are witnessing the illegal annexation of the Crimea and other regrettable events," Turkish President Recep Erdogan said after meeting over the weekend with Crimean leaders.

During the gathering, Crimean Tatars also called for "all necessary measures" to be taken to return Crimea to Ukraine following Russia's takeover of the peninsula last year.

Crimean Tatars have previously engaged in the battle against Moscow during attacks and shootouts along the Russian-Ukrainian border.

An estimated 10,000 Crimean Tatars have left Crimea since the Russian annexation in March 2014.

There are roughly 300,000 Crimean Tatars still living in Crimea.

"This is a forum for those who did not accept the new legal reality of the Crimea being an integral part of the Russian Federation," Vasvi Abduraimov, chairman of the Crimean republican public organization "Milli Firka" (People's Party) told Pravda.Ru of the Muslim battalion.

At least 6,700 people have died in the conflict between Ukrainian government forces and pro-Russian separatist rebels in eastern Ukraine, the United Nations’ human rights division has said.

“Serious human rights abuses, intimidation, and harassment of the local population perpetrated by the armed groups continued to be reported. The [monitoring mission] received new allegations of killings, torture and ill-treatment, as well as cases of illegal deprivation of liberty, forced labor, looting, ransom remands and extortion of money on the territories controlled by the armed groups,” the recent U.N. report said.

Moscow has long denied European Union and NATO claims that Russia has sent troops and equipment to support rebel activity in eastern Ukraine.