August 05, 2015
KIEV, Ukraine -- A soldier fighting for pro-Russian rebels in eastern Ukraine has sparked yet another war of words between Kiev and Moscow by claiming he is from 16th Airborne Brigade of the Russian army, according to a report Monday from the Organization for Security and Co-Operation in Europe, the group charged with overseeing the conflict. 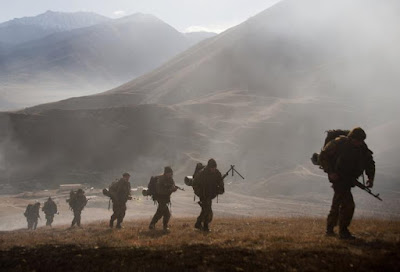 Russian servicemen take part in an exercise in the Republic of North Ossetia in 2012. According to a survey, only 25 percent of Russians believe their soldiers are currently fighting in Ukraine.

While Ukrainian authorities charge that this is more evidence that the Kremlin is supporting the 16-month-long secessionist war, Russia says no such brigade exists in its military.

“An armed man guarding the facility at one of the sites claimed that he and those present at the site were part of the 16th Airborne Brigade from Orenburg, Russian Federation. They did not wear identifying insignia," the official report said.

The soldier was questioned by officials while he guarded a pro-Russian rebel site that contained heavy weapons banned under the Minsk II agreement, according to the OSCE report.

He said his brigade was from the southern Russian city of Orenburg, near to the border with Kazakhstan.

But there are no airborne divisions in that town either.

It's unclear from the OSCE report why the rebel soldier sought to mislead officials.

"The reliability of these statements must be checked," Kremlin spokesman Dmitry Peskov said in response to a question on the issue.

Ukrainian President Petro Poroshenko has previously charged that around 9,000 Russian soldiers are fighting in the war against troops loyal to Kiev.

The U.S. and NATO have made similar accusations in the past, questioning where rebel forces obtained their vast array of expensive and hard-to-get Russian military hardware.

In May, Ukraine claimed that it had captured two men fighting with rebels in Donbas claiming to be from the Russian military.

The Kremlin denied the claim, instead suggesting that both men were mercenaries that had voluntarily left Russian service.