August 16, 2015
KIEV, Ukraine -- Russian-backed rebel forces in Ukraine are building up to "full combat readiness" after an urgent meeting between Russian President Vladimir Putin and some of his top military advisers. 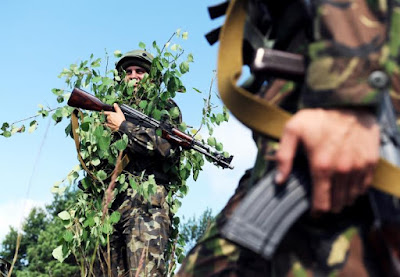 The announcement that the rebels were getting prepared in eastern Ukraine came hours after Putin called the defense meeting.

The situation on the ground in Ukraine has been tense lately.

Violence has surged in recent months.

Ukrainian officials have claimed that the pro-Russian forces have violated a peace treaty signed in February and have targeted Ukrainian troops with heavy weaponry.

The head of Ukraine's national security and defense council has said that the "shelling is carried out around the clock using large-calibre artillery and multiple launch rocket systems, prohibited by the [peace agreements]. During the day, the enemy carried out 153 artillery attacks."

War, apparently, is imminent and soldiers in the area had their August vacation leave taken away following concerns that the violence might escalate more and result in an all out confrontation.

Also on Friday, it was reported that Russia and Finland might be preparing to go to war with one another.

The reserve units in Finland on active duty jumped from 6,000 to 18,000 from last year to this year as tensions between Helsinki and Moscow have become increasingly strained.

Meanwhile, pro-Russian forces have begun claiming that the Ukrainian troops are fighting back with lethal weapons acquired from Italy and Poland.

The allegations have been denied by Kiev, which has said that its efforts to unblock the flow of lethal weapons from its allies in the last 18 months have so far been thwarted.