Russia Prepares To Force The Pace In Ukraine

August 19, 2015
KIEV, Ukraine -- Concerns are mounting that the simmering conflict in Ukraine may again be about to boil over after an upsurge in violence in the restive east of the country. 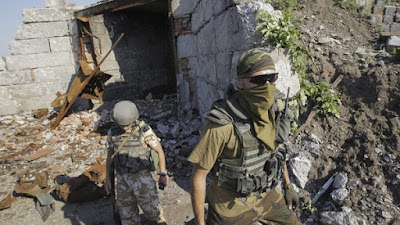 Ukrainian troops on patrol last month near the rebel held city of Donetsk in the economically unviable breakaway east.

A barrage of heavy shelling and gunfire from Moscow-backed rebels since late July has begun to take a heavy toll on civilians and Ukraine’s weary military alike.

While the bombardment is not seen as being part of a concerted military push, many on the ground are nervous of what it presages.

“The separatists are hammering us with high-calibre mortars, artillery, tanks and everything they have, all in violation of the Minsk agreements,” says Leon, a deputy commander of Kiev’s 17th battalion based north of the city of Horlivka.

“Separatist forces are building up their might . . . they are clearly preparing for an offensive and will attack soon.”

Throughout the Ukraine crisis, western diplomats note, Vladimir Putin, the Russian president, has proved adept at seizing the initiative and catching his opponents off-guard.

Some believe the latest rebel assault is part of a calculated plan by Moscow to force the implementation of the Minsk II peace plan on which the Kremlin believes Kiev is seeking to renege.

“The fighting is nothing new — it is the perfect continuation of a Russian policy line tested before,” says Igor Sutyagin, an authority on the Russian military at the Royal United Services Institute think-tank.

For example, he says, when Angela Merkel, the German chancellor, and François Hollande, the French president, refused to go to Astana, the capital of Kazakhstan, for peace talks in January, what followed was a rebel assault on the city of Debaltseve.

“A month later they started discussing Minsk II. Now Minsk II is in its last days . . . Russia wants to force new negotiations, so they will increase the humanitarian pressure.

“For Russia the use of military force is part of their diplomatic efforts.”

All agree that the status quo is unacceptable for Moscow.

The rebel-held territory around the cities of Donetsk and Lugansk does not amount to an economically viable state, meaning a continuation of the stalemate will be a long-term drain on Russian resources.

The reintegration of rebel areas as semi-autonomous regions giving Moscow an effective veto of Ukraine’s national politics — as Russia hoped Minsk II would achieve — has also been thwarted.

Kiev is attempting to implement Minsk II on its own terms rather than moving to the agreement to isolate the irredentist regions further.

But Moscow’s freedom of action is also becoming more constrained.

Most western diplomats believe the Kremlin is genuinely seeking to de-escalate tensions in eastern Ukraine so it can win some form of economic relief from damaging sanctions — evidence that the embargoes are having an effect.

Ukraine’s military has also in recent months heavily fortified key positions, including in the strategically important port city of Mariupol.

Separatist commanders admit that although Mariupol is the key to control of some of the country’s most important industrial sites, attacking the city could be more trouble than it is worth.

Another reason why Russia may be keen to negotiate is that the west has proved more united than Moscow anticipated, with Europe sharpening its diplomatic responses.

That Europe has agreed a set of automatic sanctions on Russia if Mariupol falls — pre-emptively removing the notion of European vacillation from the Russian strategic calculus — is perhaps the greatest bulwark protecting the city.

“[Putin] is not ready to wage a full-scale war as this would increase sanctions and unite Ukraine as well as the west against him,” says Olexiy Haran, a Ukrainian political science professor from Kiev Mohyla Academy.

“On the contrary, he wants to reduce sanctions while making some gains. He wants to legitimise the militants through Minsk II, and lay upon Ukraine and the west the financial burden of rebuilding [the rebel-held region of] Donbass which he himself destroyed.”

One senior Ukrainian official said that while Kiev did not see the recent rebel surge as the harbinger of a new “large-scale operation”, it did seem to be part of a strategy of “waves of escalation” designed to put pressure on Kiev and undermine public support in the government.

Military analysts also see echoes of Russia’s war with Georgia in 2008, during which Moscow crippled the Georgian military and carved out separatist enclaves under its influence.

“Russia has proved that the salami slicing method works before,” says Sutyagin.

“All it needs to do is push and push slowly: 300m here, or 1km. No decisive advances but enough to consolidate territory, pressure Kiev, and at the same time avoid triggering any western red lines.”

So while Mariupol may be off the table, other strategic sites that border separatist territory could emerge as targets.

The huge coke factory at Avdiivka, which supplies the steel mills of Mariupol, or the power plant at Svitlodarsk are of huge strategic importance to the rebels and yet not strategically important enough to trigger further economic punishment from the EU or Washington.

That alone may mark them out as possible targets too great for an opportunistic — and increasingly constrained — Putin to pass over.