Russia On Alert As US Trains Ukraine’s Troops

August 16, 2015
YAVORIV, Ukraine -- Deep in the forests and rolling fields of Ukraine’s western borderlands, a partnership that Russia hoped never to see is quickly – and noisily – taking shape. 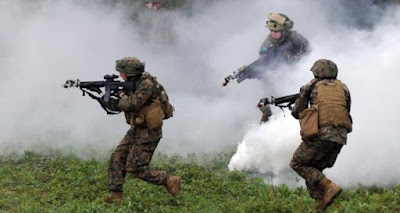 US servicemen take part in a military drill in Yavoriv, western Ukraine. Military co-operation between Ukraine and its NATO allies is set to increase in the coming years.

To the crunch of grenades and crackle of machine-gun fire, United States paratroopers are helping members of Ukraine’s national guard to better defend the country’s east from separatist militants armed by Russia and assisted by its troops.

The vast Yavoriv firing range between the city of Lviv and the Polish border hosts training that Ukraine says is vital to its security and sovereignty, but which Moscow warns will only deepen the country’s conflict and the rift between Russia and the West.

The “Fearless Guardian” programme began in April and is due to end in November, having provided three groups of 200-300 Ukrainian soldiers with eight weeks of training focused on defensive techniques.

As training resumed this week, however, it was clear that military co-operation between Ukraine and its NATO allies is only set to increase in the coming years, and that skills acquired here by Kiev’s troops could be used to great effect in a wide range of combat situations.

“They’re asking for more and more training, which is a good sign, and what we ask them to do will get tougher and tougher,” said Dana Gingrich a company commander from Maryland who serves with the US 173rd Airborne Brigade.

“They will complete their training with a live-fire exercise as a platoon, to knock out an enemy bunker . . . It’s the kind of thing we’d do before being sent to Afghanistan, so they’ll be expected to reach the same level as an American platoon.”

More than 250 US troops are now at Yavoriv, training Ukrainians in a wide range of skills, including camouflage, evasion, bomb detection, marksmanship, communication, battlefield medical techniques and use of night-vision equipment.

The Ukrainians who come here are also diverse: some served as interior ministry troops before last year’s revolution, while others left civilian life to join one of many volunteer battalions formed as Ukraine’s crisis escalated and conflict began.

“Those who might not be in great physical shape, or have much experience or be the best shot, are often the most eager to learn.

“They see their buddies coming back injured from the frontline, or they hear their war stories, and they are hungry for training,” said William Dillon a platoon leader from Michigan.

The US paratroopers regularly praise the skill and ingenuity of Ukrainians who have fought in the east, remark on their strong motivation and describe the main aim of the training as increasing their ability to survive in the conflict zone.

“They’re not just motivated, they are passionate about defending their country,” he said.

“And anyone can learn how to survive – these guys are learning how to win.”

Military analysts say Ukraine will never be able to win on the battlefield, for as long as Russia is prepared to send as many troops, volunteers and weapons over the border as is necessary to save the separatists from defeat.

“The Ukrainians have told us all about the Russian armour, tanks and artillery that they face, and how they’re used. They’re the kind of tactics I studied in college,” said Gingrich, a graduate of the US military academy at West Point.

“The Ukrainians say the separatists have huge amounts of ammunition, because the border to Russia is wide open. In Afghanistan and Iraq, we fought insurgents with limited resources – here, they are fighting an insurgency with unlimited resources.”

In such a situation, some analysts say, Kremlin backing for the militants and growing NATO support for Ukraine will not lead to victory for either side, but only escalate the conflict, increase casualties and create a proxy war between Russia and the West with unpredictable consequences for the wider region.

Russian military aircraft and naval vessels are increasingly intercepted close to or inside the territorial space of NATO members, and war games by both sides are growing in size and complexity.

The European Leadership Network, a London-based think tank, said this week that recent major exercises showed that “each side is training with the other side’s capabilities and most likely war plans in mind.

Moscow says the US presence at Yavoriv is evidence for its claim that Ukraine’s revolution and political and economic pivot to the west are all part of a US plan to weaken Russia, and to draw more NATO troops right to its border.

Western powers note that no country is forced to join the alliance, and that it is Russia’s aggression in Ukraine and its de-facto annexation of two regions of Georgia that have made its neighbours nervous about their safety.

When “Fearless Guardian” ends in November, US troops are expected to start training Ukrainian regular army units, which are now working with British and Canadian military instructors; a joint brigade of Ukrainian, Polish and Lithuanian troops is also being formed.

The US and other NATO states have so far rejected Ukraine’s requests for high-tech offensive weapons, but co-operation on other fronts is set to grow, and its symbolism and effect on Ukraine’s morale are already strong.

“A few years ago, we couldn’t imagine in our worst nightmares that Russia would launch aggression against us, and occupy part of our territory,” said Andriy Sadoviy, the mayor of Lviv, 50km (31mi) from Yavoriv.

Stabbed in the back

“We were always taught to expect a hand of friendship from the east, but we were stabbed in the back – this fundamentally changed many people’s thinking in Ukraine,” said Sadoviy, who leads the third-largest party in the national parliament.

“It also united Ukrainians very strongly, and we thank those countries that are ready to help us by sharing their knowledge and experience . . . And if we could also get access to new weapons, that would be another big plus.”