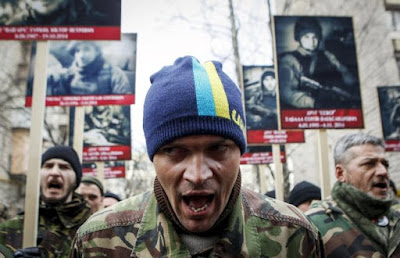 Activists of the Right Sector political party attend an anti-government march in Kiev, Ukraine, in this February 25, 2015 file photo.

A burly man with a long, Cossack-style moustache, Korchynsky has several hundred armed men at his disposal.

The exact number, he said, is "classified."

In the eyes of many Ukrainians, he and other volunteer fighters are heroes for helping the weak regular army resist pro-Russian separatists.

In the view of the government, however, some of the volunteers have become a problem, even a law unto themselves.

Dressed in a colorful peasant-style shirt, Korchynsky told reporters that he follows orders from the Interior Ministry, and that his battalion would stop fighting if commanded to do so.

Yet he added: "We would proceed with our own methods of action independently from state structures."

Korchynsky, a former leader of an ultra-nationalist party and a devout Orthodox Christian, wants to create a Christian "Taliban" to reclaim eastern Ukraine as well as Crimea, which was annexed by Russia in 2014.

He isn't going to give up his quest lightly.

"I would like Ukraine to lead the crusades," said Korchynsky, whose battalion's name is Saint Mary.

"Our mission is not only to kick out the occupiers, but also revenge. Moscow must burn."

Such talk and recent violent incidents involving members of unofficial armed groups have raised government concerns about radicals running out of control.

President Petro Poroshenko now says that all "illegal groups" must disarm because they threaten to make the country even more unstable than it already is.

"No political force should have, and will not have, any kind of armed cells. No political organization has the right to establish ... criminal groups," Poroshenko said on July 13.

The president said he might legislate for emergency powers to deal with armed groups, and that anyone armed who was not a member of the law enforcement agencies "will be classed as a terrorist."

But interviews with members of volunteer battalions and Ukraine officials suggest it will not be easy for Poroshenko to impose his will.

Some battalion leaders, while ostensibly under the control of the government, are increasingly critical of Ukraine's political leaders.

They want to press them to sack judges seen as favoring the rich and powerful, to oust oligarchs who control much of the economy and to prosecute the riot police accused of killing more than 100 people during protests early last year.

Most of Ukraine's almost 40 volunteer battalions grew out of squads of protesters who battled the Berkut riot police during the protests on Kiev's Independence Square, or Maidan Nezalezhnosti, which began in November 2013.

After the protests toppled President Viktor Yanukovich, pro-Russian separatists rose up in the east of Ukraine in April, 2014, demanding independence from the new government in Kiev, which they called a "fascist regime."

In response, several leaders of the Maidan protests raced east with fellow protesters to try to stop the rebel advance.

Numerous brigades and battalions formed haphazardly, with most leaders accepting anyone willing to fight.

Serhiy Melnychuk, who founded the Aidar battalion in eastern Ukraine and is now a member of parliament, said he signed up people between the ages of 18 and 62 and "from the homeless to pensioners."

Irregular though theses forces were, some acquired weapons from the Defense Ministry, officials and battalion leaders said.

Others received money and equipment from wealthy oligarchs.

They became powerful forces in the struggle against pro-Russian separatists.

In an interview in Kiev, Melnychuk, wearing a cross around his neck and a wristband in the national colors of Ukraine, said that he had five men on the day the Aidar battalion formed, but 250 within two weeks.

They had all fought on the Maidan and "didn't need military training," he said.

He conceded some Aidar members ran out of control.

"I don't deny people were looting there (in eastern Ukraine)," he said.

Melnychuk now faces various charges from Ukrainian prosecutors connected to his time in the east.

They include robbery and forming an illegal group; Melnychuk denies the charges.

In addition, the human rights group Amnesty International has documented cases of abuse which it says were committed by members of Aidar last year and "amount to war crimes."

The allegations include abducting and beating men suspected of collaborating with pro-Russian separatists, and extorting money.

Last year the Ukrainian government tried to bring Aidar and other volunteer groups under its control.

It ordered Aidar to reform into the 24th assault battalion as part of Ukraine's official forces.

Melnychuk described that order as "criminal," but said most of his men had demobilized or come under official control by this year.

He and other battalion leaders said that their soldiers' loyalty did not always lie with the authorities and that some groups still operate beyond official control.

Melnychuk was scornful of attempts to crack down on the battalions, saying such moves had been provoked by Russia spreading propaganda.

He said Russia was scared of the battalions because the volunteers inflicted the most losses on the pro-Russian rebels, "so they pretend that we eat little children for breakfast."

The political situation in Ukraine remained difficult and fragile, he said, criticizing the lack of change in government.

"The (Maidan) revolution was interrupted by the aggression (in the east) and the patriots left Maidan and went to the east to protect Ukraine," he said.

"Only 10 percent of people in positions of power are new; the rest are all the same, pursuing the same schemes they always did."

Andriy Filonenko, a founder of the Tornado battalion, was equally defiant about accusations against his fighters.

Eight members of the battalion have been accused of crimes including rape, murder and smuggling.

Ukrainian officials say one video shows a re-enactment of how members of Tornado forced two captives to rape another man; they also say some 40 members of the battalion have criminal records.

"I don't understand all this talk about criminal records," he said.

"All I know is that people spilt their blood for Ukraine, for the motherland."

Like Melnychuk, Filonenko said the "old order" was out to protect itself.

He said the charges were only made after the Tornado battalion had uncovered what it said was a smuggling ring involving local politicians in east Ukraine.

Filonenko, who wore a black T-shirt with a red Ukrainian trident on it, defended the battalion's actions, citing the violence and lack of resources in the east.

"It's a war. They're not handing out sweets," he said.

"Think of it this way: There's a task, for the task you need a vehicle to get there and back – but they don't give you any vehicle or petrol to fulfill the task ... You have to pick up wounded ... so what do you do? ... Of course, you stop a car and take it."

"THEY STEAL A LOT"

Close to bankruptcy, Ukraine has struggled to implement reforms demanded by the Maidan protesters.

Its police and courts are still widely seen as favoring the powerful, and bribes are still used for everything from avoiding speeding penalties to getting into good schools.

For some powerful interests, the rule of force, not law, remains tempting.

In March, a group of armed men in combat fatigues raided the Kiev offices of the state-owned oil company UkrTransNafta.

Two parliamentary deputies accused the billionaire Ihor Kolomoisky, who harangued journalists at the scene of the raid, of sending the masked men into the building after one of his allies had been sacked as chairman of the company.

Kolomoisky is widely credited with funding volunteer battalions that defended the city of Dnipropetrovsk and fought against pro-Russian separatists in eastern Ukraine.

Poroshenko moved to assert his authority, meeting Kolomoisky in the aftermath of the raid.

As a result, Kolomoisky stepped down as governor of Dnipropetrovsk, in the east of the country, though he remains a powerful business figure with political influence.

Interior Minister Arsen Avakov told reporters Ukraine was now "rebooting" all of its power structures to start with a "clean sheet," and at the same time trying to root out criminal elements in the battalions.

"As in all big communities of people, there are different types," he said.

"We must tell the truth: Some have looted and we will punish them."

He said that some armed groups "appropriated the names" of established battalions and that "no one really knows where they are fighting or where they have fought."

He said he intends to take members of Tornado battalion to court for their alleged offences.

"Who made the decision, turned a blind eye to their criminal record and allowed them to become police officers? Who gave them weapons and did not foresee the possible tragic consequences?" he said in an interview at the prosecutor's office.

He said he wanted to check all police battalions "in order not to have a second Tornado."

Matios recognizes that his moves may prove unpopular.

"I understand a very large part of society may even hate me for the thankless but legal work that we do. It's not comfortable at a minimum."

On July 8, activists poured manure at the front entrance of his office.

He described it as a paid-for protest.

A shoot-out earlier this month between the police and forces linked to the political group Right Sector showed the issue of independent armed groups had to be dealt with, officials said.

Right Sector, a far right Ukrainian nationalist party that runs volunteer battalions, said two of its members were killed after being set upon by police in the town of Mukacheve, western Ukraine.

The Interior Ministry said the group had fired first.

After the incident, Right Sector called for the interior minister to resign and threatened to send battalions of fighters to Kiev.

Ukraine's government says that Right Sector and other groups have to decide whether they want to be political groups or combat battalions, but cannot be both.

In his billiard club headquarters, commander Korchynsky of the Saint Mary battalion made his disdain for the government plain.

"Like the majority of Ukrainian people, I think (the new leadership) is bad ... They steal a lot. When Yanukovich was stealing, that was bad. But these people are clearing up when the country is at war, so they are guilty on two counts. This is marauding."

He said the revolution that began with the Maidan had been interrupted, but would one day be completed.

He did not say when.

If so, he will have to confront Poroshenko.

On July 16, the president, decried the problems posed by unspecified "internal enemies" of the country.

He told parliament: "I will not allow anarchy in Ukraine."