August 17, 2015
BERLIN, Germany -- Calling the situation in eastern Ukraine "explosive", Germany's foreign minister urged both parties in the conflict to come together quickly for talks to prevent a spiral in violence. 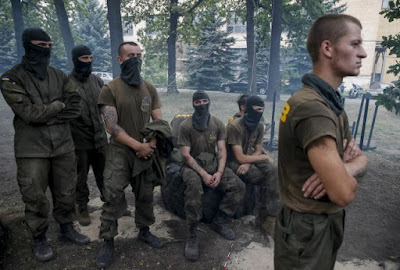 New volunteers for the Ukrainian interior ministry's ''Azov'' battalion look on as they take part in tests before heading to frontlines in eastern Ukraine, at the battalion's training centre in Kiev, Ukraine, August 14, 2015.

In a newspaper interview on Sunday, Frank-Walter Steinmeier said he had proposed in talks with his Ukrainian and Russian counterparts that Kiev and pro-Russian separatists sit down urgently with representatives from the OSCE (Organisation for Security and Cooperation in Europe) to try to reduce tensions.

"The situation in eastern Ukraine is explosive," he told the Bild am Sonntag.

"There is a lot at stake. If both parties in the conflict don't return to the peace process, a new military escalation spiral could be triggered at any time."

A peace deal signed in mid-February in the Belarus capital Minsk has eased but not ended the violence in eastern Ukraine, with Kiev and rebels trading blame over the past week for repeated violations of a ceasefire.

Last Monday, Ukraine accused the separatists of carrying out the heaviest artillery attacks on government positions near the port city of Mariupol in half a year.