August 21, 2015
WASHINGTON, DC -- House Speaker John Boehner's office called out the Obama administration this week for failing to take any steps to arm Ukraine, even though Congress approved legislation more than eight months ago giving President Obama that option. 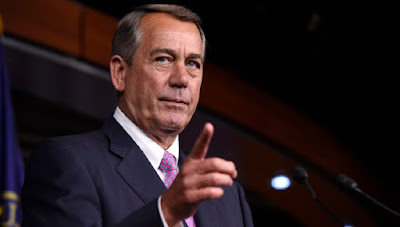 Boehner's staff put out an email Wednesday called "The White House is Abandoning Ukraine," which said Russia continues to attack Ukraine and that the United States needs to stand with its ally and provide it with lethal aid.

"Ukraine desperately needs aid and defensive weapons to defend its freedom, and Secretary of Defense Ash Carter has said he's 'very much inclined' to use the authorization Congress granted last year to give Ukraine this critical support," the email said.

But it noted that so far, "President Obama refuses to sign off."

Since then, Republicans in particular have pushed Obama to use that option, but there have been no signs he is ready to take that step.

State Department officials have been pressed by reporters for months on whether the administration is moving any closer to a decision, but those questions have been with non-answers.

"I'd just say we continue to assess that, that we are constantly looking at our policies on Ukraine," State spokesman Jeff Rathke said in May.

"But I don't have an announcement to make."

The issue came up at the Aug. 6 Republican presidential debate, when a moderator asked what candidates would do if Russia took further steps to destabilize the region.

"Under Obama and Clinton, we found a lot of mush over the last two years," replied Wisconsin Gov. Scott Walker.

"We need to have a national security that puts steel in front of our enemies. I would send weapons to Ukraine. I would work with NATO to put forces on the eastern border of Poland and the Baltic nations, and I would reinstate, put in place back in the missile defense system that we had in Poland and in the Czech Republic."

When asked if House Republicans might take further steps to pressure the White House to help Ukraine, a spokesman for Boehner didn't rule it out, but said for now members continue to watch the situation.

"We are monitoring the situation over in Ukraine, as well as the administration's lack of action, very closely," said spokesman Kevin Smith.

The memo closes with a more general critique of the Obama foreign policy: "the Obama administration continues to focus more on befriending our enemies than helping our allies."