August 19, 2015
BERLIN, Germany -- A Russian court has ruled that an alleged “Internet troll factory” owes one month of back pay, and a single ruble in damages (about a penny), to a fired employee who claimed she was trying to shine a light on the shadowy place. 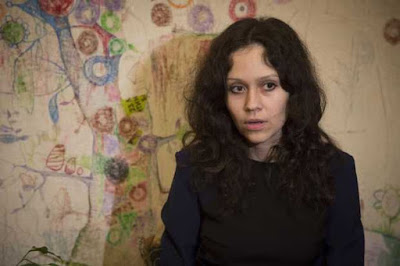 Lyudmila Savchuk was once an “Internet troll” who says she posted 100 comments a day on news sites promoting Russian President Vladimir Putin.

Lyudmila Savchuk, 34, had been fired without pay by the Agency for Internet Studies in St. Petersburg, Russia, earlier this year.

The agency, she said, was dedicated to flooding social media and the comments sections of Russian and Western news sites with criticism of the United States and European governments, and praise for Russian President Vladimir Putin.

The Kremlin has denied any involvement in the agency.

Savchuk, who worked at the place for two months, was fired in March and filed a lawsuit claiming that she hadn’t been paid, and on a broader level that the so-called factory failed to give its workers proper contracts.

After the court ruling on Monday added a penny to her approximate $700 in monthly wages, she noted that her intent as a freelance journalist had always been to expose the operation.

“I am very happy with this victory,” she said according to press reports.

“I achieved my aim, which was to bring the Internet trolls out of the shade.”

In European media, the factory came to be known as the home of “The Kremlin’s Trolls,” a reference to Internet commentators whose primary intent is to create anger and start arguments.

The efforts of the factory are believed to be part of a much larger propaganda effort by Russia to control Russian opinion and influence Western opinion.

The propaganda efforts are said to have ramped up considerably after the Russian seizure of Crimea, the Black Sea peninsula of Ukraine, in March 2014.

German media have been reporting for months about what they say are orchestrated efforts to place comments on news articles.

Columnists have noted similar sounding comments posted under many different names but all coming from the same IP addresses.

One of the more famous examples came June 3, after German Chancellor’s Angela Merkel’s Instagram account had to block Russian-language comments after it was flooded with curses and insults within minutes of being opened.

The Russian propaganda effort also is reported to include funding the French nationalist party, the National Front, as well as other extreme right-wing political parties around Europe.

The Agency for Internet Studies is reported as one of the more flagrant and obvious attempts at influencing public opinion.

In German news reports on Savchuk, she is said to have initially just been looking for employment, a claim her former employers seem to promote as well.

“She deliberately accepted this job and did the work,” Konstantin Chernyshov, a representative of the agency, told Novaya Gazeta.

“We think that her goal was to advance history in mass media and to further her career as a journalist.”

By noting that she was looking to “advance history,” he was echoing classic Soviet terminology on the benefits of pro-government propaganda.

The theory is that a free press doesn’t necessarily help society progress, but a press that responds to carefully planned dictates can create a better future.

In an earlier interview with the German newspaper Die Welt, she said:

“Our job was to praise Putin and his politics and to insult his opponents.”

Savchuk said that while working she made a hundred such comments each day, posting on social media sites and blogs and using the aliases of a student, a housewife or an athlete.

She told Die Welt that originally she had applied for the job online because she was attracted by the comparatively high salary of 640-800 euro a month, roughly between $700 and $900.

She said that during her job interview, the only question asked was, “What do you think of our approach to Ukraine?”

While working there, she said her daily routine included instructions on what line of thought to promote in her comments and which key words to include in those comments.

In interviews, she claimed to have kept a couple of examples of those notes.

One allegedly urged her to criticize U.S. foreign policy as leading to the destabilization of Ukraine.

Another allegedly told her after the Feb. 27 murder of opposition politician Boris Nemtsov in Moscow to “claim that Ukrainian activists could be involved” in his death.

Reporters from the Russian opposition newspaper Novaya Gazeta made an undercover visit to the agency in 2013 and said they found about 400 employees in a small building.

The agency reportedly has since moved to a larger property and has recruited additional workers speaking foreign languages and has added employees well-versed in Photoshop.

The effort included a graphic arts division that created racist images of U.S. President Barack Obama as an ape, or holding bananas.