Vladimir Putin Wants To 'Eliminate Ukraine – I Have No Doubt', Claims Ukrainian PM

July 20, 2015
KIEV, Ukraine -- The Prime Minister of Ukraine has claimed that Vladimir Putin is trying to “eliminate Ukraine” as conflict continues between government troops and rebels. 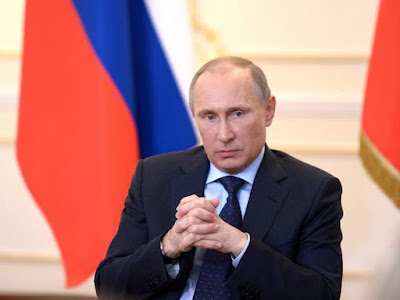 The Kremlin has continually denied sending troops to eastern Ukraine or backing separatists with money and weapons.

Russia has persistently denied supporting separatist fighters in eastern Ukraine with money and weaponry but Arseniy Yatsenyuk said there was irrefutable evidence of the presence of Russian fighters and equipment.

Speaking to The Times, on the eve of the one-year anniversary of the downing of Malaysia Airlines flight MH17, he claimed “tens of thousands” of soldiers and guerrillas were in Donetsk and Luhansk with Russian-supplied tanks and missiles.

“Putin's aim is to kill the Ukrainian project, just to eliminate Ukraine — I have no doubt,” he said,

“For Putin, Ukraine is the battlefield against the free world.”

Mr Yatsenyuk, who rose to his post after the ousting of President Viktor Yanukovych in February last year, said he was “absolutely sure” that MH17 was shot down by “Russian-led terrorists”, possibly with the help of Russian soldiers.

Ukraine is among countries including the Netherlands, Australia, Belgium and Malaysia calling for an international tribunal on the disaster that killed 298 people a year ago.

Philip Hammond supported the calls while offering his condolences to everyone affected by the disaster and promising the Government’s support for families of the 10 Britons who died.

“Justice must be delivered for the 298 innocent people who lost their lives,” the Foreign Secretary said.

“That requires an international tribunal, backed by a resolution binding all UN member states, to prosecute those responsible.

“Any attempt to undermine this process would deprive the victims of justice and cannot be tolerated.”

A UN resolution would bind all member states to bring charges against whoever shot down MH17 but Russia is expected to use its veto on the Security Council to prevent the tribunal.

In a phone call with Dutch Prime Minister Mark Rutte yesterday, Putin said it would be “premature and counterproductive” before initial investigations were completed, according to a Kremlin statement.

Mr Rutte had said the move would give “the best guarantee of cooperation from all countries” in seeking justice for the families of the victims.

On the day the Boeing 777 went down, a post attributed to a rebel leader claimed separatists had shot down a Ukrainian military transport plane in Donetsk.

The swiftly-deleted post, accompanied by a video of rising smoke, said:

Separatist forces operating around the crash site in Hrabove have since denied any involvement but Russian rebel leader Igor Girkin has been named in a lawsuit seeking $900 million (£575 million) in damages for the families of 18 passengers – six of them British.

The Netherlands is leading the criminal investigation into the downing of MH17 as most of the passengers were Dutch and a final report on the cause of the crash is due to be released in October by the Dutch Safety Board.