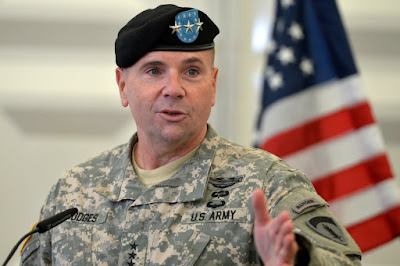 Lt. Gen. Ben Hodges, the U.S. Army's Europe commander, said the program, if approved, would be the second phase of training Ukraine forces and would involve Army units under the country’s Ministry of Defense.

Ukraine has been in a years-long civil uprising that included residents ousting their pro-Moscow president in 2014 and has since resulted in continued fighting with the new, pro-democracy government trying to quell separatist fighters backed by Russian forces.

Moscow, in the immediate aftermath of last year’s change in power, took control of Ukraine’s eastern peninsula of Crimea, which borders Russia.

The U.S. military is not providing lethal arms to the forces, and Hodges said there are no immediate plans to change the policy.

Hodges also said the Russians would like a land bridge to Crimea but would first need to take over the Ukrainian port city of Mariupol -- a situation that has U.S. officials on alert.

He said the Russians have nine to 12 battalion tactical groups in the vicinity of Rustov, near the coastal Ukrainian border, which he describes as “not a normal base.”

He also pointed out the swiftness with which the Russians invaded Crimea.

However, Hodges said he could not provide evidence that a land-bridge operation was imminent and suggested rebel forces still didn’t have enough “capabilities” in place -- including air power.

He cited recent acts of terrorism inside Ukraine including “booby traps” and IEDs, or improvised explosive devices, similar those found in Iraq traceable to Russians.

When asked by Fox News whether he saw direct evidence that Russians are involved in acts of terrorism against Ukrainian civilians and government officials, Hodges said the leaders of the Independent Republic of Luhansk and Donetsk were brought in by the Russian military to “organize things.”

“It would be hard to believe that most of the attacks are not known or tolerated” by the Russians, he added.