Ukraine's Self-Defense Units Look For The Enemy Within 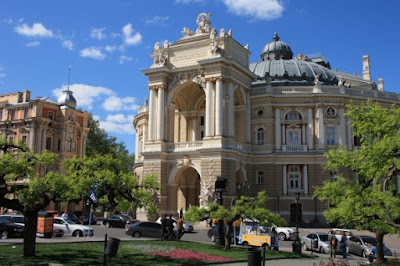 "We'll ask him a few questions and then we'll hand him over to the security services," said Panevsky, a portly part-time opera singer who has refashioned himself as the commander of an armed patriotic vanguard against secessionist sentiment in Odessa.

Odessa lies more than 500 kilometers (300 miles) west of the front line in east Ukraine, where government troops are mired in a war of attrition against Russian-backed separatists.

Still, anxiety about a second front emerging here is fueled by regular news of arrests of people suspected of plotting militant anti-government activities.

Panevsky says authorities aren't doing their job and units like his are stepping in.

"The fight against separatism should be carried out by the security services, which are completely corrupt and compromised," he said.

His organization comprises 300 active volunteers, but that he can draw on hundreds more in the event of mass unrest, Panevsky said.

The hardcore members of the unit gather for light arms training at a camp outside Odessa at the weekend.

The legal status of such self-defense units is unclear, and some in the city speculate that they may be set on a collision course with authorities nervous about the presence of unaccountable armed gangs.

By Panevsky's own admission, his unit's activities clearly cross into legally questionable territory.

While giving a tour of his group's headquarters, he showed a dank basement room where he said detained people are sometimes kept.

Pressed about the whereabouts of the captured pro-Russian activist, Panevsky demurred and said the man would soon be released.

He quickly changed the subject, instructing underlings to organize a honey-trap drug purchase to catch a small-time pusher.

It was unclear whether the suspected separatist agitator was in fact detained.

Odessa has not been spared its share of unrest.

The city tipped into bloodshed in May last year, when clashes between pro-unity and pro-Russian activists culminated in 48 deaths.

The bulk of those deaths occurred after the pro-Russian crowd was cornered in a trade union building that was later set alight.

Those events had an almost instantaneous chilling effect on the activities of Russia-leaning activists.

Those who agree to speak publicly are wary about labels that they fear could attract attention from authorities.

"When somebody says that I am pro-Russian and they are pro-Ukrainian, it feels as though they want to annul my Ukrainian citizenship," said Maurice Ibrahim, a leading figure in the anti-government Kulikove Pole movement in Odessa.

Kulikove Pole is named for the city square where the activists habitually congregate.

Ibrahim's background is a vivid illustration of the eclectic mix of interests encompassed by the movement that militates for Ukraine to develop closer ties with Russia instead of the West.

He left behind the civil war in his native Lebanon in the mid-1980s to study in Odessa, and stayed.

He became a Ukrainian citizen 10 years ago.

For Ibrahim, the appeal of the pro-Russian camp stems from his radical left-wing political views.

Others in his movement cleave to more emotive issues of ethnic ties to Russia, language rights and the perceived notion — energetically propagated by Kremlin media — that the Ukrainian government is pursuing a far-right agenda.

Citizens of Odessa predominantly speak Russian, the lingua franca that unites a city renowned for its rich and long history of ethnic diversity.

The promotion of a loudly Ukrainian nationalistic message smarts with those Odessans who take pride in their distinctive identity.

Moscow's hand is seen behind much of the violent trouble that has hit Ukraine over the past year, including in Odessa.

In April, the Security Service of Ukraine announced it had detained 10 people suspected of planning to set off explosions in the city.

The security services said the group was found in possession of bomb-making equipment, guns and flak jackets.

Officials claimed the men were being coordinated by the Russian special services, although it offered no evidence.

Odessa's regional branch of security services told The Associated Press it could divulge no information on people currently facing charges of separatist activities, but it did say that no Russian citizens have been arrested.

Ibrahim and like-minded activists denied those in Kulikove Pole had any connection to subversive activities.

"The blasts, these are likely the work of solo operators," Ibrahim said.

"They imagine that they are doing something that will benefit us somehow, whereas in fact they are only doing us harm."

When not patrolling the streets or trying to apprehend petty criminals, the Ukrainian patriotic groups also indulge in low-level intimidation of anti-government, pro-Russian groups.

A press conference in Odessa last week given by the lawyer of a jailed Kulikove Pole activist was mobbed by a group of muscled men, who heckled and laughed throughout the proceedings.

One man seen in the room was a leading figure in Panevsky's organization.

Nadezhda Melnichenko, a reporter with Odessa-based news site Timer, whose editorial line is strongly critical of the current government, said such petty harassment is commonplace.

"There is nobody here for them to physically attack, but the appearance of young men with powerful bodies has a certain intimidating effect," Melnichenko said outside the press conference hall.

Panevsky argued that with the country fighting a war against what most Ukrainians believe to be an external aggressor — Russia — there is no room for squeamishness about going after those perceived to be a threat.

"It's very important to look after every small piece of land, every millimeter of Ukraine," Panevsky said.

"We can't allow anybody to denigrate or destroy our national values."