Ukraine Must Be Armed to Counter Putin’s Advance

July 28, 2015
LONDON, England -- From the outset of the Ukraine crisis, the West has acted on the premise that economic sanctions would induce Russia to modify its actions. 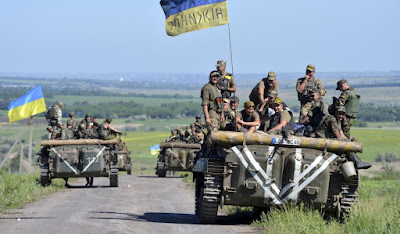 Members of the Ukrainian armed forces gather on armored vehicles on the roadside near the village of Vidrodzhennya outside Artemivsk, Donetsk region, Ukraine, June 9.

But while sanctions do constrain capacity, they do not constrain behavior.

Their immediate impact is bearable.

Moreover, they do nothing to diminish Russia’s most usable and effective form of power: military force.

Given the stakes, the case for strengthening Ukraine’s defenses is compelling.

The Russian military offensive of August 2014 secured diplomatic concessions in Minsk that would not have been granted otherwise.

An even more devastating offensive of January to February 2015, in blatant violation of the first Minsk agreement, produced a second Minsk accord even more flawed than the first.

According to its terms, future election conditions, constitutional reform and the restoration of border control are subject to the agreement of the separatists, who have license to withhold their consent indefinitely.

It is blindingly obvious to the Kremlin that the separatist enclaves are neither absorbable by Russia nor sustainable in the long term.

They are useful solely as a bridgehead for securing Russia’s wider objectives in Ukraine: its “federalization” (loss of sovereignty), “non-bloc status” (enforced neutrality) and the abandonment of its European course.

So far, military force has been the arbiter of this process.

But if Russia’s military card is devalued, so is the bridgehead.

And there are good reasons to believe strengthening Kiev’s military muscle would be effective.

Ukrainian national sentiment and civil society have been strengthened by the war, especially in the east.

It also has underestimated the capacity of Ukraine’s fighting forces.

Russia’s military system is potent but under strain.

Its battle groups are not occupation forces.

They strike hard and withdraw.

The maintenance of 40,000 to 50,000 troops in theatre have placed demands on ground forces units as far away as Kazakhstan and Vladivostok.

There is reluctance to risk prolonged exposure of ethnic Russian servicemen to hostile Russian-speaking populations in eastern Ukraine.

They are burdened by the hangover of a largely unreformed defense system, by distrust between volunteer units and higher command echelons and by a deficit of competent command and staff officers above unit level.

Yet they are also dangerously outmatched in hard capability.

In the Debaltseve offensive, Russia brought into the field advanced weapons systems against which Ukraine had no countermeasures.

Kiev needs capabilities that will protect its forces and slow down the battlefield.

If opposition forces are likely to face effective resistance and protracted combat, they will be less likely to attack.

Yet, in their absence, even a well-trained and highly motivated force risks evisceration in battle.

Much has changed since President Obama first declined Ukraine’s request for non-lethal assistance, and NATO allies are now contributing to Ukraine’s defense in a variety of ways.

The problem is that the contribution is unsystematic, uncoordinated and unevenly matched to Ukraine’s needs.

In many quarters, it is now axiomatic that a refocusing and enhancement of Western assistance will “provoke” Putin into a dramatic escalation of the conflict.

Yet there is nothing in Putin’s record to support this assumption.

What has repeatedly provoked him, however, is weakness and bluff.

In a contest with high-risk players, there is no such thing as a risk-free policy.

Failure to modify an ineffective policy invites at least as much danger as a more robust course.

Today’s dangers are created by Russia’s political aims, its military actions and its increasingly febrile and conspiratorial view of the world.

So far, within these ominous parameters, the Kremlin has behaved according to a rational calculus.

In this calculus, no respect is shown to opponents who are stronger, but unwilling to use their strength.