July 09, 2015
KIEV, Ukraine -- The California police force is serving as more than just the inspiration for the second season of True Detective these days; it’s also serving as a training force in war-ravaged Ukraine. 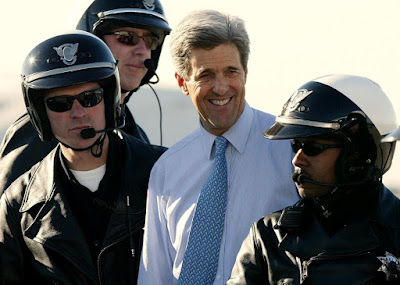 Sending in the cavalry!

Trainers from the California Highway Patrol will arrive next week to build a “new police” force in Odessa, according to Geoff Pyatt, the American ambassador to Ukraine.

The plan comes from Mikheil Saakashvili, governor of Odessa, who in 2005 famously fired 30,000 police officers in an effort to target corruption during his first year as president of Georgia.

EurasiaNet reports: A successful police overhaul is seen as crucial for success in Odessa, where questions had been raised about the region’s allegiance to the government in [Kiev] and its ability to shed the ossified system of dubious business interests.

[Highway police] is used metonymically for a highway robber in much of the post-Soviet world….

The idea is that the California Highway Patrol will train the new officers, who will be expected to vow to take no bribes, to be less corrupt than the previous ones.

One is the war with Russia…The other is the war against corruption, the war for reform, the war to move Ukraine towards the standards of modern European democracy…

California Highway Patrol will be trainers helping to establish a new Odessa Patrol Police… a force which is professional and, most importantly, un-corruptible.

Pyatt added that the United States will be funding an “anti-corruption action team” and grants program.

Neither Pyatt’s statement nor Saakashvili’s specified how many trainers would come from California, why they were coming specifically from California, or what prior experience they had with Odessa.

Saakashvili has lived in exile from Georgia since his presidency ended in 2013 under a cloud of his own corruption allegations, and eventual charges.

His appointment as governor of Odessa was a controversial one.

Saakashvili is a divisive figure, whose extradition from Ukraine has been demanded by Georgian public prosecutors.

Unknown said…
This comment has been removed by the author.
12:58 PM